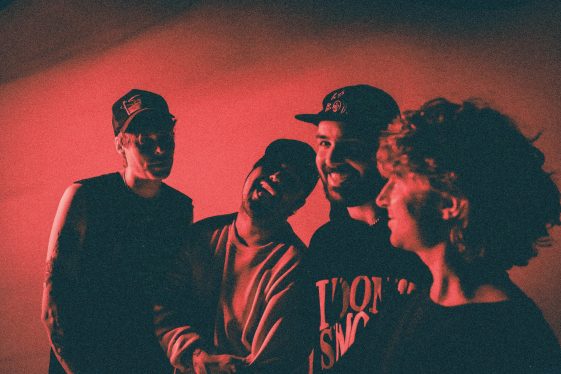 “Encino Part 1 is the first part of a collection of songs we began writing early in our history up until now.  We were partying constantly at our house in Encino, staying up til sunrise and losing nights of sleep, spending the little money we had at Chili’s happy hour and making a ton of music. No matter where the band goes, we’re still that group of friends and always will be.” – Stu Da Boi, 7715

Since 2018, the boys wrote, recorded and perfected a signature sound of undeniable hooks, danceable beats, and genre mockery. Most recently they’ve supported both Bryce Vine and Mod Sun and played sold out rooms in New York, Los Angeles, Chicago, and Minneapolis among others.

7715 consists of multi-platinum/TOP 40 songwriter, JP Clark (Blink 182, blackbear, Bryce Vine, Machine Gun Kelly, Pink Sweats, Cyn, Lukas Graham), rapper Stu Da Boi, singer Tyler Wilson, and guitarist/producer Daniel Geraghty. Though the specific details may be a little foggy now, the story of 7715 Bluebell Avenue in Southern California comprises parties to rival Project X and The Hangover, magical impromptu late-night jam sessions, and the start of an eternal brotherhood when the four lifelong musicians penned a song together in order to help Stu get over a life-altering breakup. The intersection of Stu, JP and Tyler’s vocals proved undeniable when backed by Dan’s production and instrumentation.