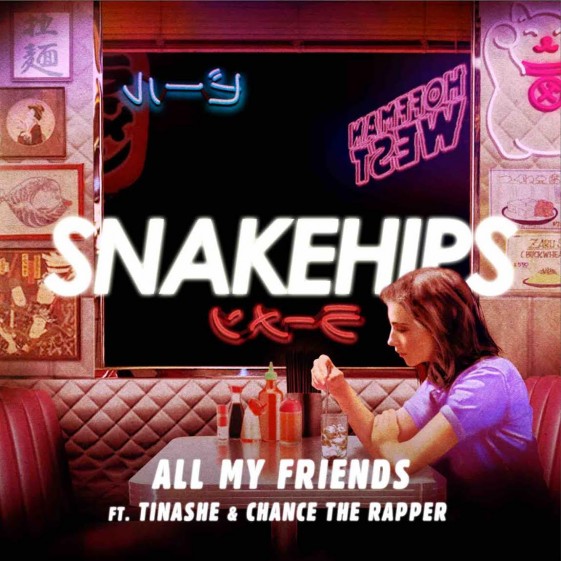 Following the success of their ‘Forever (Part II)’ EP earlier this year, Snakehips are back alongside two of R&B and Hip-Hop’s most creative new-school artists in Tinashe and Chance The Rapper to present their new single, ‘All My Friends’. An instant success, the collaboration went straight to #1 in the HypeMachine chart, has had over 5 million plays and reached #65 in the UK Shazam Chart – and this is only the beginning.

‘All My Friends’ evokes the spirit of future-facing Hip-Hop and R&B, with both the sultry vocals of Tinashe and witty, quick-fire wordplay of Chance The Rapper lacing Snakehips’ punchy, dreamscape-like beat with both power and purpose. The hook – both emotional and vividly infectious – grounds the record too, giving it a thoughtful, binding quality sure to lend itself well to international audiences.

This summer has seen the pair embark on an extensive sold out tour of the US and Canada, playing a mammoth 16 shows throughout May/June and even supporting Major Lazer on their European tour, but not before they played a series of UK dates in March following the release of the ‘Forever (Part II)’ EP. Their exploits so far this year have also seen them nominated for a MOBO Award in the ‘Best Newcomer’ category alongside the likes of George The Poet, Sinead Harnett and Nao.

The duo catapulted onto the scene at the end of 2014 and took their 100% self-promoted debut “The Girl Is Mine” to number 1 on the BBC Radio 1 Dance Chart and number 1 on Shazam in towns and cities across the UK. This unprecedented breakthrough led to 40 labels courting the UK duo. Having played a string of festivals this summer, including Creamfields, Lovebox, Bestival, Reading and Leeds, as well as numerous dates in Ibiza, the band are currently recording new material. With their first records racking up airplay from Annie Mac, Pete Tong and Danny Howard as well as some of the biggest DJ/producers on the planet including Afrojack, Martin Solveig and Laidback Luke, there seems to be no telling what will happen next.