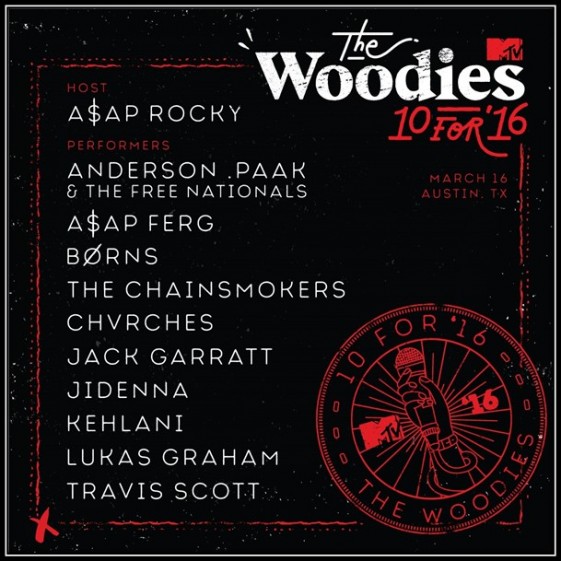 Check out the full announcement below, and set your DVRs now for Wednesday, March 16th at 8pm/7c for this special event hosted by RCA’s own A$AP Rocky!

MTV today announced the hand-picked 2016 class of artists set to take the stage at “MTV Woodies/10 for 16,” MTV’s annual emerging artists showcase held at the annual South by Southwest Music Festival.  Airing Wednesday, March 16, 2016 LIVE from Austin, Texas at 9:00 p.m. ET/PT, “MTV Woodies/10 for 16,” will spotlight an eclectic roster of artists including Anderson .Paak & The Free Nationals, A$AP Ferg, BØRNS, The Chainsmokers, CHVRCHES, Jack Garratt, Jidenna, Kehlani, Lukas Graham and Travis Scott.  In the spirit of music discovery that drives SXSW, “MTV Woodies/10 for 16” has a newly reimagined format this year with more music, less awards, and a focus on these select emerging artists, their fans, and the established artists who support them.  The “Woodies” will be hosted by Harlem rapper and cultural tastemaker, A$AP Rocky. To listen to music from the “10 for 16” artists, click here.

“I did my first big performance at the ‘Woodies’ and I’m excited to come back this year. Get ready for the ride of your life!” – Travis Scott

“To us, the ‘Woodies’ represent a pinnacle in artistic recognition in music – it is truly an honor that this year we will not only be attending but also playing at this dope ass show.” – The Chainsmokers

“This year, the ‘Woodies’ will be classic.” – Jidenna

Fans are encouraged to join the conversation around their favorite emerging artists as part of an MTV Woodies’ and REESE’S Peanut Butter Cups fan engagement campaign, from March 9 – March 16. During the campaign, fans will be asked to cosign their favorite rising stars of 2016 using the custom hashtag #woodiescosign on Twitter to help build a ‘Perfect Combination’ inspired Woodies playlist that will live on Reeses.mtv.com. The top mentioned fan cosign will be revealed on-air during the “MTV Woodies/10 for 16.” Additionally, MTV and Reese’s have teamed up with YouTube Star Rebecca Black, who will rally her 5MM+ fans across her social footprint to join in the Reese’s and Woodies conversation, and co-sign their favorite acts of the year.

In addition to the one-hour live broadcast on MTV, the four-hour “MTV Woodies/10 for 16” festival will air live in its entirety on the newly launched network MTV Live at 4:00 p.m. CST and livestream on woodies.mtv.com.