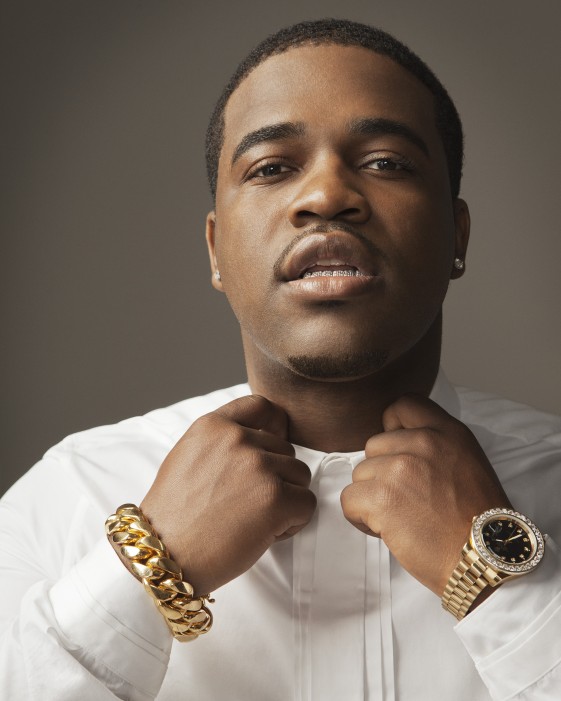 A$AP Ferg Strives For Perfection: ‘I Want To Project the Future Of A Better World’

By: Sowmya Krishnamurthy via The Village Voice

Always Strive and Prosper. It’s more than a feel-good album title for A$AP Ferg; it’s a way of life. “That’s the voyage that I’m going through right now. I’m always striving. You hit new levels [and] even when you hit that new level, there’s a new level from there.”

It’s early evening in a tiny dressing room at the Adidas Originals store on 136 Wooster Street. The 27-year-old rapper waxes poetic while kicking his feet — outfitted with his custom-designed Adidas sneakers — in a swivel chair. He’s been fighting off a cold and beads of sweat gather at his forehead. Outside, the din grows as fans pack into the store to hear the rapper’s forthcoming sophomore album, set to be released April 22.

Born Darold Ferguson Jr., in Harlem, A$AP Ferg grew to prominence alongside high school friend A$AP Rocky in 2009, but his creative trajectory didn’t begin with rap. Ferg’s late father, Darold Ferguson, was a prolific designer who created logos for Bad Boy Records, and had his own fashion line called Ferg Apparel. As a teen growing up in Hamilton Heights, Ferg attended the High School of Art and Design and peddled his own clothing and accessories. “It’s in the bloodline,” he tells the Voice. Following A$AP Rocky’s breakthrough, “Peso,” Ferg realized rap was a viable career option. “I started getting the calls from Warner Bros., Sony. Any rap label you could think about called my phone [to] try and get meetings with A$AP [Mob].”

While Rocky, the self-professed “Pretty Motherfucker,” is the collective’s rock star, Ferg is its darker, grimier figure. In 2013, he released his debut, Trap Lord, buoyed by the underground bangers “Work” and “Shabba.”

For Always Strive and Prosper, Ferg isn’t resting on his indie laurels. “Soon as you get settled on what you’ve accomplished, it’s over! I don’t ever wanna get comfortable.” That hunger is apparent throughout the album. Ferg experiments sonically with cool, weird sounds. On the single “Hungry Ham,” he joins forces with Skrillex and his wunderkind protégé Crystal Caines for a rambunctious, frenzied nod to his uptown stomping grounds. “I’m from 143rd, I come from Hungry Ham, ya heard?/Where the pigs will lay you down and make a nigga bite the curb/Them kids is poppin’ Percs because they claim it cool they nerves,” he raps. “Cause that’s my block, Hungry Ham/Nigga fuck your block, Hungry Ham/Better wear your Glock, Hungry Ham.” It’s pre-gentrification Harlem to the fullest.

Another standout is “Strive” (featuring Missy Elliott). The jubilant house track could thump at any downtown or gay club. “You can be you today/You can be you tonight/Know you’re feeling really great/It’s going to be all right,” he sings on the infectious hook. “Strive” forges new sonic ground for Ferg and the track’s producer, DJ Mustard. “I don’t consider it as [taking] a risk,” says Ferg. “I just look at it as creating art. Was Picasso taking a risk when he decided to go abstract? No. He was just creating art.”

The rapper says the fact that he was exposed to diversity growing up helped nurture his comfort with crossing genre lines to move beyond rap’s oft-limiting constraints. “I would sit at lunch. I’m the Harlem kid with the Timbs and the Vanson, [but] I’m around goth kids and gay kids. I’m around fashion designers and break-dancers. I’m around dancehall. All of these different facets of life, that’s how I create. I create with all of these different textures and people because that’s what I’ve been around all my life.”

This philosophy causes the album to run longer than necessary, and gems like “Rebirth” and “Let You Go” (which chronicles why a seven-year relationship with his girlfriend ended during the making of this album) get hidden among the fifteen tracks, three skits, and a lengthy guest list that includes Chuck D, newcomer Lil’ Uzi Vert, Chris Brown, Future, Rick Ross, Ty Dolla $ign, ScHoolboy Q, Big Sean, and French Montana. There are also appearances from Ferg’s mom and grandmom, as well as Tatianna Paulino, mother of A$AP Mob’s late visionary A$AP Yams. Ferg explains that it’s intentional — guests represent his past, present, and future. “These are all the textures that make me,” he says. “I have my teachers on the album. Then I have my fellow colleagues that I’ve grown with and [younger artists] who I’m showing the ropes. This is the lunchroom table.” He laughs. “At this school, no one’s cutting class.”

There’s a knock at the door and Ferg’s publicist beckons. He has more interviews before the album preview. He’s unsure what response Always Strive and Prosper will elicit, but he hopes fans get a better understanding of him after listening. “As an artist, I want to project the future of a better world. A better world is a better me.”