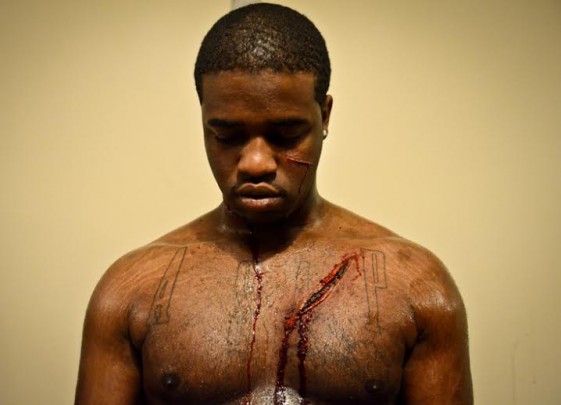 Can A$AP Ferg Be His Generation’s Next Great Visionary?

Interview By: Kathy Iandoli via Noisey

A$AP Ferg is tucked in the back of the Crosby Bar at New York’s Crosby Hotel, and he’s feeling under the weather. He’s wearing an inside out sweatshirt with “PSYCHO” emblazoned on the front, made by his uncle (the “Psycho” on his latest album), along with Adidas track pants and a pair of his Trap Lord x Adi Ease kicks from his Adidas collection. A packed press schedule is stopping him from getting better, but he’s in good spirits eating poached salmon with quinoa and sweet potatoes, while sipping on a glass of Riesling. I casually recite Kanye West’s “beasting off the Riesling” line and Ferg perks up a bit. “Kanye’s so funny because I’m just hearing from madd different sources, like he must’ve been jamming the songs I put out ‘cause he went on Twitter and said he loves my album,” he says with a warm smile. “I heard from somebody that’s working with him in Germany that Kanye said I’m his favorite artist.” Despite being arguably at the top of his game, things like that still mean something to A$AP Ferg.

Born Darold Ferguson Jr., Ferg was raised on 143rd Street between Amsterdam and Broadway in Harlem’s Hamilton Heights (“Hungry Ham,” if you ask him). His father designed both the Bad Boy Records logo and Andre Harrell’s logo among others, which infused fashion into Ferg at a young age. His start-up clothing line Devoni Clothing had artists like Chris Brown and Swizz Beatz rocking his belts long before Ferg even touched a microphone. His ascension as part of A$AP Mob was swift—some may argue that it derived from a tight grip on Rocky’s coattails, though now Ferg has carved his own niche in the game.

A$AP Ferg is like a levelheaded Kanye West. He has huge dreams, and gets animated as he discusses his AGOLDE denim capsule collection with Citizens For All Humanity, designed after the jeans from his “Work” video. He wants to do more fashion and film, but hopes to reach a place where he can readily receive the capital to do it all (sound familiar?). He says the glitz and glamour of fame don’t faze him—and while he rocks his name on a diamond-encrusted ring that spans the length of four knuckles, he views it as a piece of art over a proof of purchase.

But there’s a self-awareness to A$AP Ferg that behooves him. His latest project Always Strive And Prosper is geared to be one of the best albums of 2016. The album boasts an A-list roster of collaborators including Chris Brown, Rick Ross, ScHoolboy Q, Chuck D, Missy Elliott, and French Montana. “I was almost done with this album and realized I had no features,” Ferg jokes, explaining most of the artists were either friends he came up with (a la ScHoolboy Q) or mentors (a la Rick Ross). His family is all over this album too. From the aforementioned Uncle Psycho to his mom and his grandmother. It’s a family affair, punctuated with in-depth glimpses into Ferg’s psyche. He’s a “trap lord,” sure, but above all he’s an artist who remains cautiously optimistic that people will keep fucking with his art. In order to really deliver his best effort, though, he had to toss some of that caution into the wind.

“I became a better artist when I stopped giving a fuck,” he says.

Read the rest of the article now on Noisey.