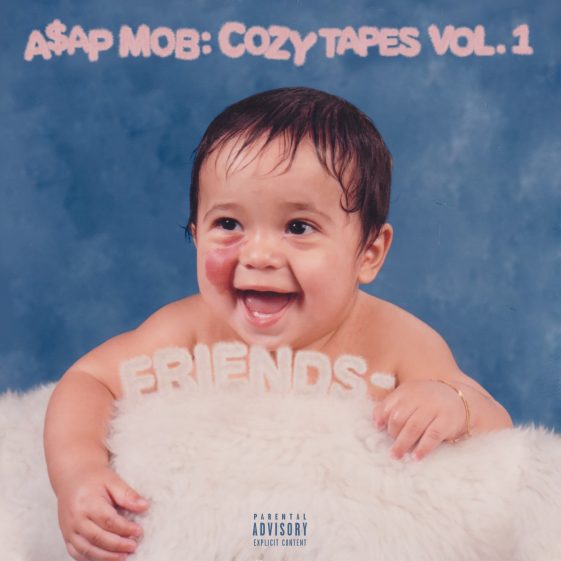 Cozy Tapes Vol 1: Friends- is the blueprint laid out by one of the founding members of A$AP Mob and the often-referred to spiritual guide, A$AP Yams, who tragically passed in early 2015 and was known amongst his peers and beyond as one of the most respected and beloved members of the community. Earlier this year, A$AP Mob members came together in NYC to commemorate his life at the first annual sold-out Yams Day show at T5 and were joined by Yams’ mother Tatianna Paulino who spoke and gave her blessing.

Throughout the summer of 2016, the A$AP Mob track “Yamborghini High” featuring A$AP Rocky, A$AP Ferg, A$AP Twelvyy, A$AP Nast, A$AP Ant and Juicy J became an anthem and the colorful camouflage video sky-rocketed the song, now with over 39M views on YouTube and over 20M track streams on DSP.  The Mob performed the song in late July on The Tonight Show starring Jimmy Fallon and brought exciting live performances throughout the summer. Earlier this month, A$AP Rocky announced a partnership between AWGE and MTV Labs and premiered another song off the album, “Crazy Brazy” featuring A$AP Rocky, A$AP Twelvyy and Key!, which now has over 1.5M streams between Apple, Spotify and YouTube. On October 20th, Red Bull Studios in London debuted the new AWGE-produced short film Money Man, directed by A$AP Rocky and Dexter Navy.  The short film is sound-tracked by two songs from the album, “Money Man” and “Put That On My Set” featuring A$AP Rocky, A$AP Nast, Young Lord and Skepta – links to watch below.

WATCH THE MONEY MAN SHORT FILM AND HEAR “MONEY MAN” AND “PUT THAT ON MY SET” http://smarturl.it/MMPTOMSVideo