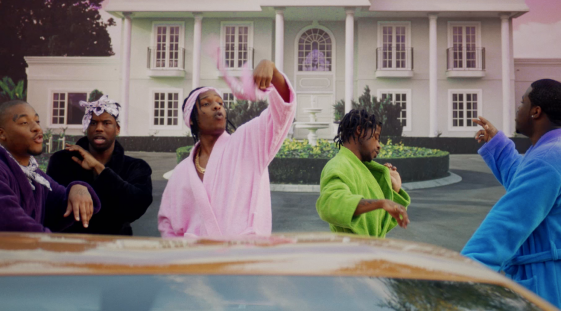 [New York, NY – May 11, 2016]  A$AP Mob’s Wavy Wednesdays continues today with the video premiere of “Yamborghini High.”  Directed by Shomi Patwary, the video features the Mob and friends cloaked in cozy bathrobes with appearances by Juicy J and A$AP Yams’ mother Tatianna Paulino.  Click here to view the “Yamborghini High” video and here to listen to the track.

A$AP Mob‘s first public performance of “Yamborghini High” was during the sold-out inaugural “Yams Day” tribute concert at New York’s Terminal 5 on January 18, 2016, in honor of the Mob’s late founding member and creative curator Steven “A$AP Yams” Rodriguez. Determined to carry on Yams’ legacy, A$AP Mob will release the long awaited Cozy Tapes Vol. 1 this summer on A$AP Worldwide/Polo Grounds Music/RCA Records, which will include the project’s first official single “Yamborghini High.” Before his passing, Yams laid out the sonic blueprint for what he envisioned being the next Mob release.  Now with help from A$AP Lou and J Scott, Mob members Rocky, Ferg, Twelvyy, Nast and Ant will deliver the quintessential tribute to one of New York’s most favorite sons.

Members of the A$AP Mob have their targets set on making 2016 the biggest year yet for the Harlem collective. ASAP Ferg’s recently released sophomore album, Always Strive And Prosper, debuted at #8 on the Billboard 200 chart, and  #2 on both the R&B/Hip-Hip and Rap charts according to Nielsen SoundScan.  This entry marks the second-highest new music debut on the Billboard 200 for the week of release as well as Ferg’s second top 10 debut on the chart.  The album’s lead single, the energetic “New Level” featuring Future, has received over 37 millions streams worldwide via Spotify and Apple Music. Always Strive and Prosper is quickly becoming the breakthrough album that defines Ferg’s footing in the rap game and the critics agree.  “It’s hard to think of a hip-hop album with more heart, one with a narrative more thoroughly interwoven with the love of family and friends, than ‘Always Strive and Prosper’…  a chaotic, buoyant album, moving at varying speeds and with different textures,” proclaims The New York Times. Ferg hits the road on the co-headlining “Level Up Tour” with Tory Lanez starting May 18th in Philadelphia. Visit LevelUpTour.com for more information.

Also slated for this summer is the debut mixtape release, 2127301090, from A$AP Twelvyy, the next member of the Mob to make his mark this year.  Twelvyy has built his own strong following after touring with Rocky last year and now on the road with NYC crew Flatbush Zombies.  His track “L.Y.B.B. (Resolution),” is an instant anthem for those who struggle, aspire and eventually overcome.  The video shows Twelvyy in his element in NYC, amongst cameos from Rocky, the Mob, Flatbush Zombies and a mariachi band. Twelvyy’s charismatic demeanor and stage presence paired with his infectious flow and charm makes him another winning bet for 2016. WATCH “L.Y.B.B. (RESOLUTION)” – https://www.youtube.com/watch?v=bmaLgwy8DQI

In other A$AP news, A$AP Nast is currently branding the A$AP Worldwide name overseas during his headlining “The Nasty Tour” with remaining stops in Dublin, Milan, Amsterdam and more. A$AP Ant is working on new music and it wouldn’t be like A$AP Rocky to close out the year without something new.  More information on all things A$AP will be announced soon.