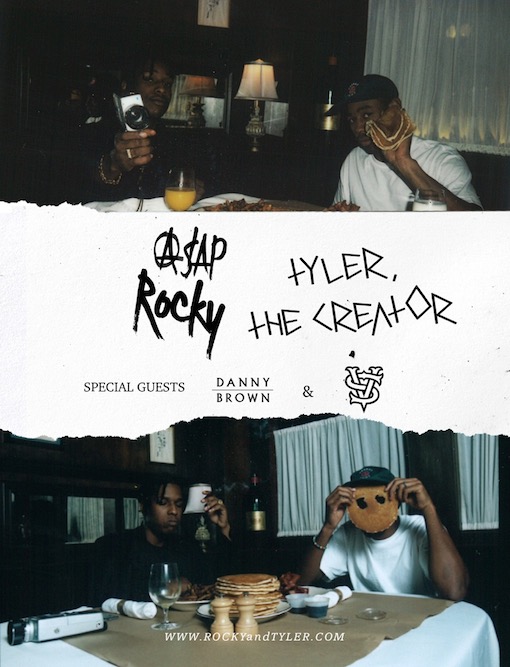 A$AP Rocky has his eyes on dominating 2015 and from the looks of the first half of the year, he’s on his way. From dropping the critically acclaimed album AT.LONG.LAST.A$AP (A$AP Worldwide / Polo Grounds Music / RCA), starring in the summer coming-of-age film, Dope, TV appearances on The Tonight Show starring Jimmy Fallon and The Late Late Show with James Corden, appearing on the covers of Complex, Billboard and The Source, and owning last weekend’s Lollapalooza music festival in Chicago, Rocky is everywhere. Today, Rocky and Tyler the Creator officially announce a co- headlining fall tour across select cities in North America, with Danny Brown and Vince Staples as support – see dates below + a list of Rocky’s US festival appearances.

A.L.L.A.’s surprise release earlier this year was not only an exhilarating moment in music history but a welcome jump into summer for anxiously waiting fans, propelling it to #1 on the Billboard 200, R&B/Hip- Hop and Rap charts. The second studio album from the Harlem-born artist, executive produced by A $AP Mob co-founder A$AP Yams and Danger Mouse, shows Rocky’s artistic evolution, with him singing as well as rapping, while introducing the sounds of psychedelia and covering a range of topics from love and drugs, to the church and personal identity, and, of course, fashion. The curated list of guest collaborators made heads turn with features from Mos Def, Schoolboy Q, Miguel, Mark Ronson, Rod Stewart, Juicy J, UGK, Kanye West and new AWGE represented-artist, Joe Fox.

Rocky’s live show is not to be missed – as evidenced by an epic show at Lollapalooza 2015. Cited by Pitchfork, Stereogum, Billboard, SPIN, NME and more as amongst the best of the weekend, Rocky dominated with performances of new songs “L$D”, “Electric Body”, “M’$”, “Lord Pretty Flacko Jodye 2 (LPFJ2)” as well as crowd-pleasing classics “Wild For The Night” and “F**ckin Problems” and new Chief Keef collab “Superheroes” as 80,000 fans cheered and danced along at every moment. Joining Rocky on the road this fall, Odd Future founder Tyler The Creator and hip-hop forces Danny Brown and Vince Staples will make this the fall show not to miss!