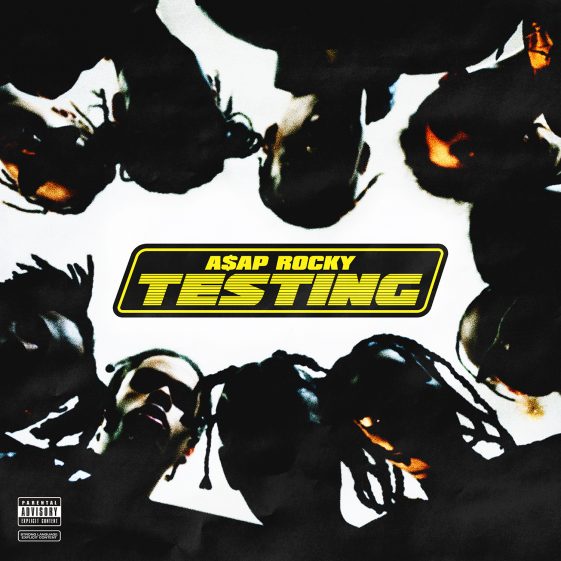 With two #1 debuts on the Billboard 200 for previous albums, Long.Live.A$AP and At.Long.Last.A$AP and over 4.5B streams worldwide, TESTING launches a new era for Rocky, testing new sounds and ideas in an unparalleled musical landscape where he continues to break the mainstream mindset with sonics rarely heard in hip-hop. Executive produced by A$AP Rocky and co-executive produced by Hector Delgado, Juicy J, Chace Johnson, and AWGE, TESTING was recorded over three years between New York, LA, London and Berlin. This album picks up where Rocky last left off, weaving mind-melting aural psychedelics into hip-hop that is, at times dark and confessional, and in other moments uplifting and celebratory. Rocky is joined on TESTING with features from Juicy J, T.I., Moby, Frank Ocean, French Montana, FKA twigs, Skepta, Kid Cudi and Kodak Black.

A$AP Rocky kicked off release week with a live-streamed performance art piece, titled Lab Rat, at Sotheby’s in New York on Sunday, May 20th where he also revealed the cover art for TESTING. Encased in a glass room inside the gallery hosting a live audience watching, the rapper/actor/creative director and entrepreneur spent 90 minutes exploring and interpreting the creative process with an audience through a series of tests and simulations, while he was treated as a test subject himself. Special guests included A$AP Ferg, A$AP Twelvyy and Dev Hynes, along with a phone call appearance made by David Banner.

Earlier this year, Rocky teased the album’s imminent arrival with the first official single, “A$AP Forever” featuring Moby. Wildly fêted by media such as the New York Times, Rolling Stone, Pitchfork, Billboard, Noisey, The Fader, Complex, Hypebeast, High Snobiety, SPIN, Stereogum and more, the song features a sample from “Porcelain” off of Moby’s record-breaking album, PLAY. Anthemic in its own right, the official release of “A$AP Forever” followed a late night debut on The Tonight Show Starring Jimmy Fallon, where Rocky performed a medley of “A$AP Forever” and “Distorted Records” in a custom set designed by AWGE. The following day, Rocky surprise-released the official video, co-directed by Dexter Navy. The visually stunning narrative warps through different scenes, flipping time and space until the final moments of seeing Rocky in a sensory deprived environment before a startling end, all incorporating the thematics of TESTING.

Since the release of his last solo album, A$AP Rocky has been anything but quiet. Carrying on the legacy of the A$AP Mob co-founder A$AP Yams, Rocky and the A$AP Mob released two mixtapes, 2016’s Cozy Tapes Vol 1: Friends- and 2017’s Cozy Tapes Vol 2: Too Cozy, featuring the hit single “RAF” which has now streamed over 174.5M times. He’s also been carrying on the yearly tradition of Yams Day in NYC, doing late night TV appearances, going on world tours and starred in a highly touted Calvin Klein advertising campaign. The past two years have also seen Rocky’s creative agency AWGE in the spotlight, launching partnerships with MTV, GUESS, Under Armour, Courvoisier, Dior, Mercedes Benz and JW Anderson and also launching the careers of new artists such as Playboi Carti, Smooky MarGielaa and more. Rocky has collaborated with many high-profile artists, resulting in multiple songs in the top 10 at radio and millions of streams, including G-Eazy‘s 3x RIAA Platinum “No Limit” with Cardi B, Famous Dex‘s RIAA Gold “Pick It Up,” which has racked over 200M streams with Gucci Mane and 21 Savage from the Uncle Drew soundtrack, Mura Masa’s “Love$ick”, Tyler, The Creator’s “Who Dat Boy”, and songs with Lana del Rey, The Weeknd, Young Thug, Skepta, Juicy J, Quavo, 30 Seconds to Mars, Alicia Keys and more.

In March, Rocky dropped the track “Bad Company” featuring BlocBoy JB, which was streamed over 5M times in less than 2 weeks. It’s no wonder the GQ Style 2017 cover-star was dubbed “the world’s flyest human”.

As one of the most anticipated albums of 2018, TESTING will be the ultimate way to kick off the holiday weekend and an essential soundtrack for the summer of 2018 and beyond. Follow A$AP Rocky’s official socials and head over to TSTNG.CO for more info on the album and merchandise; stay tuned for more announcements. TESTING is out now via A$AP Worldwide/Polo Grounds Music/RCA Records.