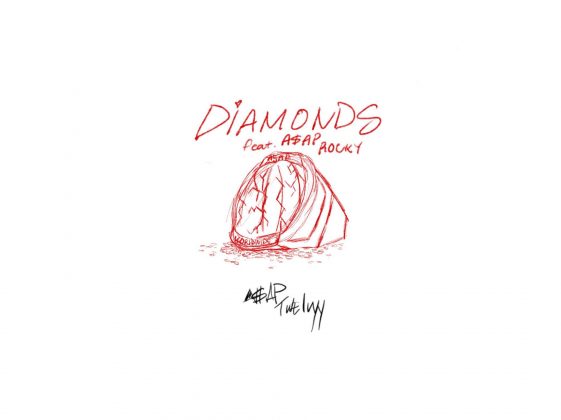 NYC rapper and A$AP Mob affiliate A$AP Twelvyy has been blazing a trail in recent weeks with two new singles, a video, an album trailer and today he announces his debut album 12 on A$AP Worldwide / Polo Grounds Music / RCA Records with the release of his new track “Diamonds” feat. A$AP Rocky. The album is now available for pre-order with the reveal of the track list below and cover art photo by Ellington Hammond and design by Gabriel Diaz. The previously released singles including “Diamonds,” the Sampha-sampled “Strapped” and “Yea Yea Yea (Maps)” whose song-title was inspired by the renowned indie band, will all be available as instant-grats upon pre-ordering 12. The album also boasts appearances from A$AP Ferg and the whole A$AP Mob, Joey Bada$$, Flatbush Zombies, as well as special guests Michael Rapaport and Fredro Starr. Produced by Finatik & Zac and Jim Jonsin, “Diamonds” sports that unmistakable A$AP sound while Glock Rivers himself and Rocky reflect on past lives and present success.

A$AP Twelvyy is making rap for real, something you feel with a singular voice and a brand new body of work that fans have been eagerly awaiting since his music began appearing on various releases from his prolific A$AP Mob outfit. Recorded between New York and LA with the help of producer and engineer Hector Delgado at his studio in Van Nuys, CA, 12 is A$AP Twelvyy’s Illmatic: soulful, heartfelt and definitive. Listen to “Diamonds” feat. A$AP Rocky now, share and keep 12 on your radar as Twelvyy continues to burn.

“Strapped” offers a more contemporary take on the New York sound, one that’s likely to please the old heads without alienating the kids.” – PITCHFORK

“As one of the underrated members of the crew, Twelvyy is at his absolute best as he hops on A$AP P’s Sampha-sampled instrumental – and spits the kind of heat that only those Harlem boys are capable of giving us”. – VIBE

“One of the more overlooked and underrated members of the A$AP Mob, A$AP Twelvyy has been quietly delivering some of the best music to come out of the camp as of late.” – 2DOPEBOYZ