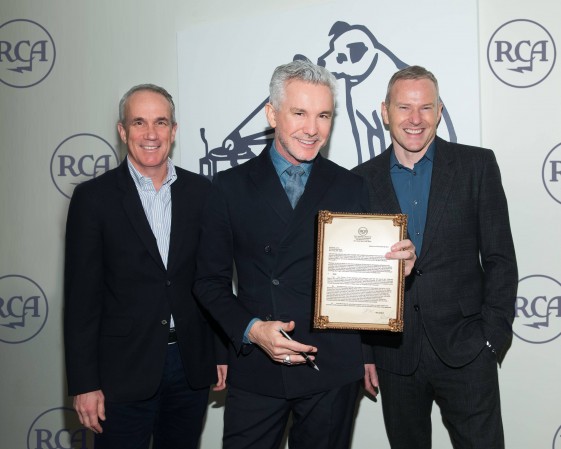 World renowned director, producer and screenwriter Baz Luhrmann enters into an exclusive, worldwide and multi-tiered agreement with RCA Records. This long-term joint venture will consist of a new record label, Bazmark Records with RCA as Luhrmann’s creative, marketing and distribution partner on his label’s recorded music endeavors. The deal will also include the potential of jointly acquiring the rights to additional recording projects as well as signing new artists under Bazmark Records / RCA Records.

Luhrmann has already begun production / pre-production on projects that will be a part of this new endeavor with RCA, including the recently announced music centered drama series “The Get Down” which is slated to air on Netflix next year. This Sony Pictures TV project is told through the lives and music of a ragtag crew of South Bronx teens, “The Get Down” is a mythic saga of the transformation of New York City in the late 1970s, a time when the music of Hip-Hop, punk and disco exploded and coincided with the rise of crime, violence and urban decay.

“We couldn’t be more excited to welcome the incomparable Baz Luhrmann to the RCA Records family,” says Peter Edge, Chairman and CEO, RCA Records. “Baz’s creativity and passion is what makes him one of the most dynamic creative visionaries of our time.”

“We are so lucky to have teamed up with Baz, whose artistry we have long admired,” says Tom Corson, President & COO, RCA Records. “His success in shaping culture speaks for itself. We can’t wait to get started on our creative partnership.”

“While I’m probably best known for story-telling and ideas my true passion has always been music,” says Luhrmann. “You can imagine what it feels like for someone from a small town in Australia to be invited to join the legendary record label “RCA”, home of The King, and so many musical legends and personal heroes.

While it’s a joy to write and produce music, I find real fulfillment in collaboration and it’s been a privilege over the years to have worked with such a diverse range of musical talents from almost every genre.

Peter and Tom have injected a new inspiring energy into this much revered label and I for one am excited to be part of it.”

Baz Luhrmann has become one of the world’s most recognizable creative forces in the industry today through his success in a diverse range of award-winning projects. His award winning films include the 3-D adaptation of F. Scott Fitzgerald’s The Great Gatsby (2014), Australia (2008), Moulin Rouge! (2001), William Shakespeare’s Romeo + Juliet (1999) and his first ever motion picture Strictly Ballroom (1992).

Luhrmann served as the executive producer as well as co-wrote and co-produced several tracks on the soundtracks for The Great Gatsby, Moulin Rouge! and Romeo + Juliet. All three soundtracks have sold in excess of 15 million albums worldwide and landed within the top 3 on Billboard’s Top 200 chart. In 2014 Luhrmann and Jay-Z were nominated for a Grammy Award as co-producers for Best Compilation Soundtrack for Visual Media (The Great Gatsby). The Moulin Rouge! soundtrack produced the Grammy Award winning song “Lady Marmalade,” which won for Best Pop Collaboration With Vocals in 2002. The hit song, which featured Christina Aguilera, P!nk, ‘Lil Kim and Mya, spent 5 weeks at #1 on Billboard’s Hot 100 and was the worldwide top-selling song of 2001. The Romeo + Juliet soundtrack spawned the hit tracks “#1 Crush Remix” by Garbage and “Lovefool” by The Cardigans. “#1 Crush Remix” spent 4 weeks at #1 on Billboard’s Hot Modern Rock Tracks Chart and was nominated for Best Song from a Movie at the 1997 MTV Movie Awards. “Lovefool” peaked at #2 on Billboard’s Hot 100 Airplay, Top 40 Mainstream and Adult Top 40 Charts. Additionally in 1998, Luhrmann produced and released his own album, Something for Everybody, which consisted of new versions of music from his various films and plays, including hits from Romeo + Juliet, Strictly Ballroom and La Bohème. The album produced the hit song “Everybody’s Free (To Wear Sunscreen)” also known as “Sunscreen Song.” The track went #1 in the UK and Ireland and just last year made a surprise return into the Top 10 on Spotify in the UK.

In addition to his film and music projects, Luhrmann is one of Australia’s most imaginative and strikingly original opera directors. His work has been seen on the award winning Broadway production of Puccini’s La Bohème, Lake Lost and Benjamin Britten’s A Midsummer Night’s Dream. Most recently, he came full circle when he directed the stage musical adaptation of Strictly Ballroom in Australia.