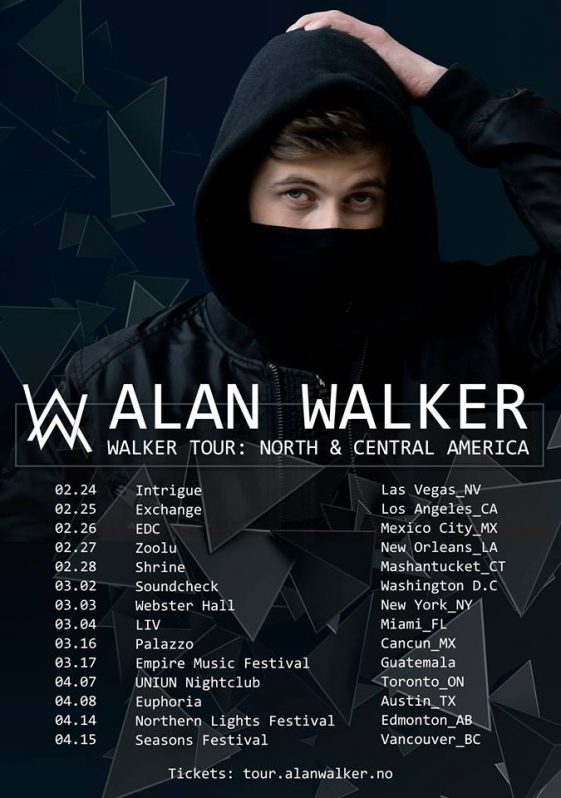 (New York, NY – January 18, 2017) – Norwegian/British producer Alan Walker (Sony Music Sweden/RCA Records) will hit the road starting in February for a series of shows around North America, for the first time ever. This encompasses the U.S., Canada, and Mexico. Starting on February 24 in Las Vegas. Alan Walker will hit major cities including Los Angeles, Washington D.C., and New York. During his shows, fans can expect to hear Walker’s hits, including his international sensational hit “Faded”, his current hit single “Alone” as well as new music. Tickets are available now at tour.alanwalker.no. Tickets for the Miami, Edmonton, AB, and Vancouver, BC shows will be on sale soon.  Full tour routing is below.

The 19-year-old Norwegian producer Alan Walker has emerged on the global music scene as one of the most successful artists of 2016. His record breaking single “Faded” was released in December 2015 and has sold more than 9.5 million units worldwide, has received more than 1.5 billion streams and the video has almost 900 million views on YouTube. It entered the Billboard Hot 100 in the US and is certified gold and platinum in more than 29 countries. It was #1 on the Global Shazam chart for 7 consecutive weeks and #1 on the European Radio chart for 6 consecutive weeks. Most recently, “Faded” has been nominated for a 2017 Brit Award for British Single. His second single “Sing Me To Sleep” has garnered over 243 million streams and over 177 million views on YouTube. His recently released single “Alone” has 55 million streams on Spotify alone, is #30 on Billboard’s Hot Dance/Electronic chart while the video has over 105 million views on YouTube since its December release. This past summer, Alan toured all across Europe and performed at various festivals including Tomorrowland in Belgium and Creamfields in the UK and supported Rihanna during her European leg of her ANTI World Tour. In October, his remix of Sia’s hit ”Move Your Body” was included on the Deluxe version of her album “This Is Acting”.

Listen to “Alone” on:

Watch the Official Video for “Alone”