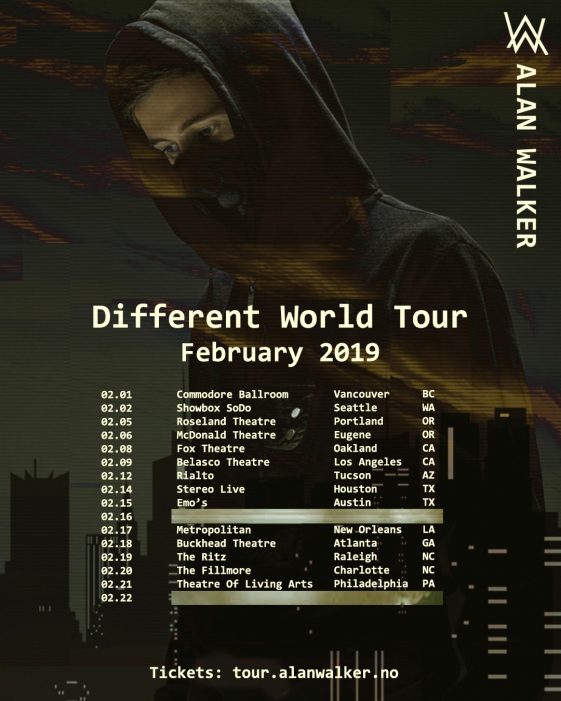 LATEST SINGLE & THIRD INSTALLMENT OF THE WORLD OF WALKER TRILOGY

(New York – November 13, 2018) Today Alan Walker, a Norwegian artist, DJ, producer, and one of the most streamed artists globally with over 14 billion streams,  announces his North American tour that kicks off February 1st in Vancouver, Canada. Tickets are on sale to general public on Friday, November 16th at 10 am local time with a Spotify pre-sale available November 14th at 10am-November 15th at 10pm, and local pre-sale on November 15th from 10am-10pm.

“Diamond Heart” is the final single/video in the World Of Walker trilogy, presenting Walker’s futuristic, post-apocalyptic sci-fi storyline as seen in the “Darkside” and “All Falls Down” visuals, all presenting hopeful views for the future with majestic landscapes. The video before “All Falls Down,” “Tired” directed by Alexander Halvorsen, served as a prequel to the trilogy where a solar storm destroyed all technology on earth, changing the course of humanity forever. These videos, storyline and concept are the brainchild of MER Records creative director Kristian Berg.

Previous trilogy single “Darkside” has enjoyed over 300 million streams between the video and audio track combined, and “All Falls Down” has exploded with OVER 650 million audio and video streams globally, held the #1 spot on Billboard’s Dance Club Songs Chart, and enjoyed play on Top 40 radio stations.

In the past two years, 21-year-old Alan Walker has gone from learning music production via YouTube tutorials and posting music online for free to performing to sold-out crowds and playing dates with the likes of Rihanna and Justin Bieber. Currently, Alan has been certified Gold and/or Platinum in 32 countries.

Alan’s fan base first exploded when the gaming community’s use of his music made him one of the most streamed artists globally with over 14 billion streams worldwide to date. His debut single breakthrough single “Faded,” now 2x certified platinum is the seventh most-liked video on YouTube of all time with over 5.8 billion streams worldwide. He boasts over 19 million followers on YouTube alone. On DJ Mag’s annual poll where people from all over the world voted for their favorite DJs, Alan moved up 38 places on this year’s list to number 17. Alan was also awarded the magazine’s “Highest Climber” award, which celebrates the DJ that moved up the list in ranking the most in the span of a year.