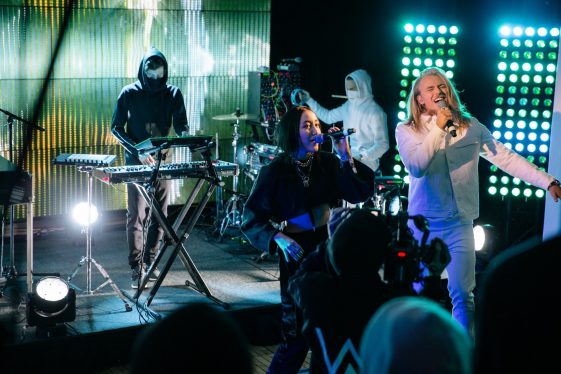 “All Falls Down” Remixes: https://AlanWalker.lnk.to/AllFallsDown-Remixes

(New York, NY – Dec 5, 2017) British-Norwegian artist, DJ and producer Alan Walker, and Noah Cyrus along with guest vocalist Juliander released a special performance video of their single “All Falls Down” filmed at YouTube Space New York this past Saturday, Dec. 2nd. The performance was filmed in celebration of the early success of the new single as well as Alan surpassing 10 million YouTube subscribers, and represents the first time the trio has performed the track together live. YouTube Spaces are state-of-the-art production facilities designed specifically for YouTube creators to produce great video content.

“I’ve been looking forward to finally perform “All Falls Down” together with Noah Cyrus and Juliander, and this week we finally got it done! They’re both great artists, and I really hope that all Walkers around the world will enjoy the result as much as I do. It was also amazing to perform the single at YouTube Space New York, and I’m really happy that they gave us the opportunity to make it happen!”

Walker and YouTube have an exciting history together. Alan, who started out learning to produce music via YouTube tutorials in his family’s home in Bergen, Norway, is responsible for one of YouTube’s most successful channels. After honing his talents, he build his initial fan base in the gaming community by giving his music away for free and encouraging other gamers to use it for their gaming videos. His unique journey led to him being one of the most streamed artists globally and helped catapult his debut single, “Faded,” to the 38th most viewed video and 8th most liked video on YouTube of all time. It is also one of the few videos to gain more than 1 billion views on YouTube (currently at 1.4B).

“Alan’s journey on YouTube and rise to stardom is truly incredible,” said Vivien Lewit, Global Head of Artist Services at YouTube and Google Play Music. “From hitting 10 million subscribers, to finding a massive global audience, we’re thrilled he’s been able to use YouTube as a way to share his music, videos and connect with fans.”

“All Falls Down” was initially released on Oct 27th via Sony Music Sweden/RCA Records and features co-production by Digital Farm Animals. Since its release it has been streamed on Spotify over 35 million times and the song’s official music video has been viewed over 41 million times on YouTube. The song as well as the song’s remixes, including one done by Steve Aoki released this past Friday, Dec. 1st, are available across digital retail and streaming platforms. CLICK HERE to watch the tracks official music video and CLICK HERE to buy/stream the new remixes. To buy/stream the original track CLICK HERE.

“All Falls Down” represents an amazing moment for the 20-year-old Alan Walker. In just 2 short years, Alan has managed to garner over 5 billion streams worldwide by blending lively, energetic beats and harmonic, sentimental melodies. To date, Alan Walker is certified gold and platinum in 32 countries and has gained over 15 million followers across social media.

YouTube Spaces are state-of-the-art production facilities designed specifically for YouTube creators to produce great video content, from production and editing through uploading to YouTube. Run by YouTube’s in-house experts, the Spaces serve as a creative production facility for both established and emerging YouTube creators who are part of the YouTube Partner Program. Located in Los Angeles, London, Tokyo, New York, São Paulo and Berlin, YouTube Spaces enable creators to learn from industry experts, collaborate with other creators, and have access to the latest production and post-production digital video equipment — all made at no charge by YouTube provided you qualify and your application to use the Space is accepted.  For more information, please visit www.youtube.com/space.