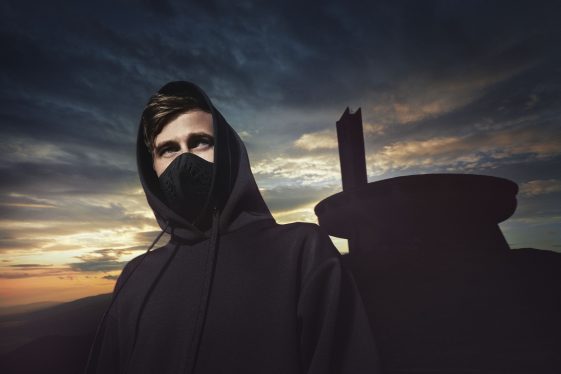 [New York, NY – February 28, 2018] Today, British-Norwegian artist, DJ and producer Alan Walker released the third installment of his YouTube docu-series, Unmasked. The series gives viewers a behind-the-scenes look into Alan’s life, unmasking the story behind his success. This latest video explores Alan’s production process, including how his hit single “All Falls Down” featuring Noah Cyrus and Digital Farm Animals (MER Recordings/Sony Music Sweden/RCA Records), which is currently #1 on the Billboard Dance Club Songs Chart, came together, as well as how he taught himself to produce and worked to craft a sound that is uniquely his own. The new episode can be found here: http://smarturl.it/AWUnlockedEp3V

It was also announced today that Alan will be joining Kygo on tour for select North American dates including Seattle, WA; Berkeley, CA; and Denver, CO.  Full list of dates included below.

In the past two years, 20-year-old Alan Walker has gone from learning music production via YouTube tutorials and posting music online for free to performing to sold-out crowds and playing dates with the likes of Rihanna and Justin Bieber. Currently, Alan is certified Gold and/or Platinum in 32 countries. Alan’s fan base first exploded when the gaming community’s use of his music made him one of the most streamed artists globally (over eight billion streams worldwide to date) and made his debut single, “Faded,” the seventh most-liked video on YouTube of all time.

“I had an interest in creating music for the present time,” explains Alan Walker in the latest Unmasked episode. “My intention back in the day, when I started making music, wasn’t to make money. I just wanted people to listen to my music as much as they wanted to.”

Alan also takes the time in this video to introduce viewers to the people that have supported him throughout his meteoric rise to stardom including his family, label, and collaborators.

In the video Alan’s collaborator, Anders Froen, explains what it was like the first time he worked with Alan stating, “I think in the beginning when Alan and I had those first sessions it felt refreshing because we weren’t constrained within those boundaries you often can be when you’re with very experienced musicians. But he was thinking outside the box and he was basing his melodies and his arrangements on instinct and passion versus on – this is how a song should be.”

The enigmatic young DJ is known for his masked performances. His upcoming European headlining tour is nearing sold-out status, while standout dates like Coachella, EDC Las Vegas, and Lollapalooza South America are being planned with subsequent dates in North America and South America.

Alan made his U.S. television debut this past January with “All Falls Down,” joined by Noah Cyrus on The Tonight Show Starring Jimmy Fallon. The single has been streamed over 125 million times since its release on Oct 27th via MER Recordings/Sony Music Sweden/RCA Records.