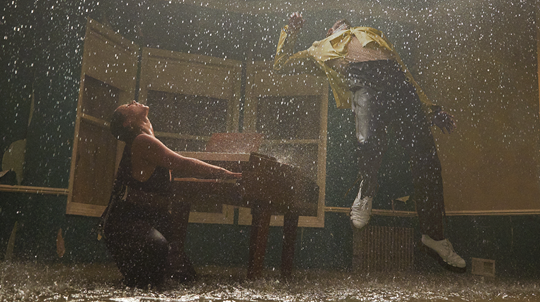 Miguel, Michael B. Jordan, Zoe Saldana and Marco Perego Saldana are featured in the project

[NEW YORK, NY September 17, 2019] — Today, 15-time Grammy Award-winning singer, songwriter, and producer Alicia Keys makes her musical return with the powerful track and visuals for “Show Me Love,” featuring Grammy Award winning singer, songwriter and producer, Miguel via RCA Records. To accompany the song, Keys partnered with Director Cara Stricker (Kacy Hill, A$AP Rocky, St. Vincent) for a triptych of one-shot scenes featuring Miguel, Michael B. Jordan, Zoe Saldana and her husband Marco Perego Saldana. The visual sonic installation debuted last night at the Dolby SoHo in NYC and included a performance by Alicia with a surprise appearance by Miguel. This song marks the first release from Keys’ seventh studio album which is due in the coming months. Written and produced by Keys, Miguel, Tory Lanez and Morgan Matthews,“Show Me Love” is an artistic meditation on the different emotional journeys and expressions of love we experience throughout life.  The installation is located at 477 Broadway and will be open to the public from Wednesday, Sept.18-Sunday, Sept 22. The track and visuals are now available to stream across digital platforms here.

“I have been on this journey to be more vulnerable; in my life, in my music; and this new visual experience reflects this time. Show me loves displays different expressions of love, the journey of it, the push and pull, the struggle and the eventual joy and peace,” said Keys.

All of the visuals were shot in seven seconds and the wider angle perspective remained consistent to show both the micro and macro of love. The experience sees an artistic exploration of emotions from Saldana and Perego Saldana as they show the many phases of love in a beautifully choreographed modern dance. Together, the two explore the highs and lows that come with loving another person. Jordan’s scene on the other hand explores self-love and the obstacles one has to push through on the journey toward inner peace. Amongst a flooding room and with rain falling from the ceiling, Keys plays the harpsichord and Miguel rises from the ground in their scene which serves an ode to the love we experience through art and collaboration.

Alicia Keys is a modern-day Renaissance woman—a 15-time Grammy Award-winning artist/songwriter/musician/producer, an accomplished actress, a New York Times best-selling author, a film/ television and Broadway producer an entrepreneur and a powerful force in the world of activism. Since the release of her monumental 2001 debut album, Songs in A Minor, Keys has sold over 65 million records and built an unparalleled repertoire of hits and accomplishments.  She released her powerful and critically-acclaimed sixth studio album HERE in 2016.