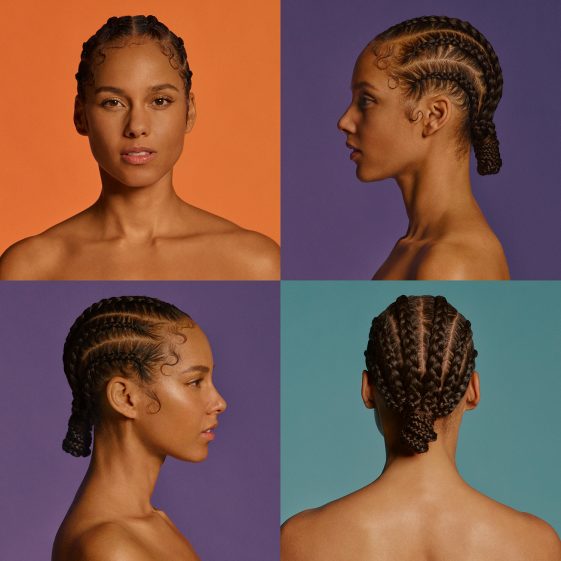 “ALICIA,” The Long-Awaited New Album From Alicia Keys, Has Arrived

Keys Set for Week-Long Residency at “The Late Late Show With James Corden,” September 21-24, Performing Songs from the New Album Each Night

“Keys embodies what it means to be ‘an artist,’ in every sense of the word with her latest project [first single] ‘Show Me Love’”  – BET.com

“[On single ‘So Done’] the R&B tandem [Keys and Khalid] soar in unison, creating another gem in Keys’ illustrious highlight reel of a career.” – Billboard

[New York, NY — September 18, 2020] Today, 15-time GRAMMY-winning artist and worldwide-celebrated musician Alicia Keys released her highly-anticipated seventh studio album ALICIA (via RCA Records), inviting the world to join her for a soulful, sensual, and introspective sonic journey. The album, which shows the many sides of Alicia at this current point in time in her life, offers a 15-song tracklist, including collaborations with the likes of Jill Scott, Khalid, Miguel, Snoh Aalegra, Tierra Whack, Sampha, and Diamond Platinumz. See full tracklist below. ALICIA is now available to stream, download, and purchase worldwide HERE.

“This album has such a special energy! It embodies everything I love about music and art at this time in my life,” Keys said. “I’m so excited to connect with people from all over the world with these sounds, lyrics and melodies. I called this album ALICIA because it’s the most me I’ve ever felt while in the studio. I got comfortable with all my different sides while creating it. I hope everyone who listens can vibe along as the truest version of themselves.”

Fans will get a chance to watch Keys premiere live performances of the new songs through American Express’s UNSTAGED series tonight, September 18 at 6:00pm ET. The singer/songwriter/producer calls the special livestream event an emotional, musical experience that cannot be missed. The event will be streamed on Keys’ Twitter, Facebook, and YouTube, and on TIDAL. For more information on the event, please visit HERE.

Keys celebrated the album’s release yesterday live on Good Morning America. During the show’s broadcast, she performed the album’s new anthemic single “Love Looks Better” in a surprise concert at Brooklyn’s Skyline Drive-In. The event was dedicated to its audience of real-life heroes: essential workers in this current pandemic (all in cars, socially distanced).

Keys is set to open this weekend’s iHeart Radio’s iHeart Music Festival with a must-see celebration of music. The event kick-offs at 9pm ET tonight, September 18, at 9:00pm ET.

To add to the excitement, The Late Late Show with James Corden announced earlier this morning that Keys will be doing a week-long residency on the show next week, September 21-24, bringing the album to life each night with performances of ALICIA songs, including some very special guests. Keys will also appear in-studio for various segments on the show throughout the week.

Following the release of ALICIA, TIDAL will share track-by-track visual commentary from Keys and exclusively release the debut episode of the ‘Credit Due’ video series, in which she and her expert contributors explore her songwriting, recording and production process while breaking down select ALICIA tracks. The episode will premiere on Friday, September 25. Dive into the full experience at TIDAL.com/AliciaKeys.

Praise for the music of ALICIA has been coming for the past year, with Keys’ steady stream of hit singles and deep album cuts. Last month saw the release of “So Done,” a smooth, cathartic R&B collaboration with Khalid, which was met with critical acclaim; iHeart called it “An anthemic godsend for the times if there ever were one.” Keys kicked off 2020 with the release of the album’s smash hit “Underdog,” which received raves reviews upon its release with E! calling it, “The power anthem you’ll play on repeat,” and Hypebeast writing, “The heartfelt anthem sees Alicia tell stories of humility and humanity.” In late 2019, Keys offered the first sampling of ALICIA with “Show Me Love,” featuring Miguel. The song earned Keys a record-extending 11th number 1 on the Billboard Adult R&B Songs airplay chart. Upon its release, BET.com wrote, “Keys embodies what it means to be “an artist,” in every sense of the word with her latest project.”

The album, which shows the many sides of Alicia at this current point in time of her life journey, is also preceded by three other already-released masterful tracks: “Time Machine,” a supersonic four-on-the-floor anthem about the freedom that comes with letting go; “Good Job,” a powerful ballad praising unsung heroes and frontline workers, which premiered in April during a special COVID-19 global town hall on CNN; and the emotional “Perfect Way To Die,” which Keys dedicates to innocent Black lives lost due to police brutality. She gave a moving performance of the song during the BET Awards broadcast in June.