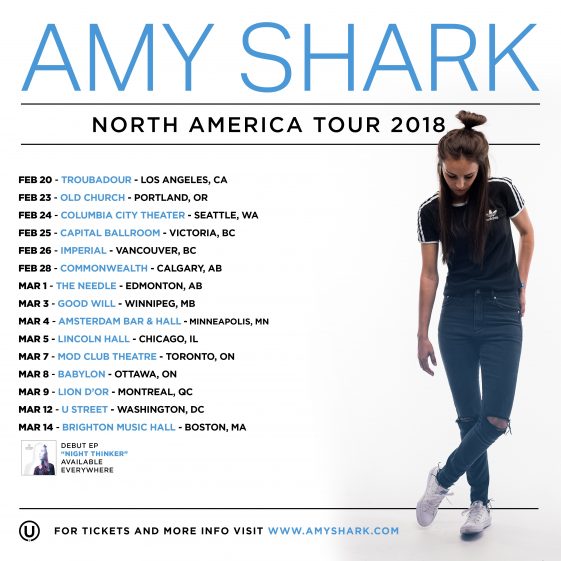 (Los Angeles, CA)—Today, Australian singer-songwriter Amy Shark announces her 2018 North American tour. Following the release of her debut EP Night Thinker, released via RCA Records, and her North American tours in support of Vance Joy and Bleachers, Amy Shark will be headlining her own North American tour, which will kick off in February and will be making stops in a number of major cities including Los Angeles, Chicago, Toronto, and Washington, D.C. Tickets for Amy Shark’s North American tour will go on sale Friday, November 17th at 10:00am local time and can be purchased here. See full list of tour dates below.

Additionally, Amy Shark has been announced as Apple Music’s Up Next Artist. Fans can watch Amy’s brand new Apple Music documentary short film, as well as her exclusive interview with Beats 1’s Zane Lowe. Last night, Amy also performed on CBS’ The Late Late Show with James Corden as part of the Up Next program (Click HERE). As the newest member of Apple Music’s Up Next roster, Amy Shark joins some of today’s most exciting and promising artists including 6LACK, Khalid, Sigrid, Mr. Eazi, Daniel Caesar, Billie Ellish and most recently, Sabrina Claudio. Get to know them all HERE

About Amy Shark
Gold Coast, Australia-based musician Amy Shark has hit the ground running with the enormous success of her brooding, coming-of-age single “Adore” (Click HERE to watch the music video), which is not only certified Double Platinum in Australia, it was #1 on the Australian iTunes and Shazam charts, and came in at #2 on triple j’s Hottest 100. She also released the music video for her latest track, “Weekends” (Click HERE to watch) and wrapped up her first-ever North American headlining tour. With the release of her debut EP and success of her tour, Amy Shark is looking towards an unstoppable future.