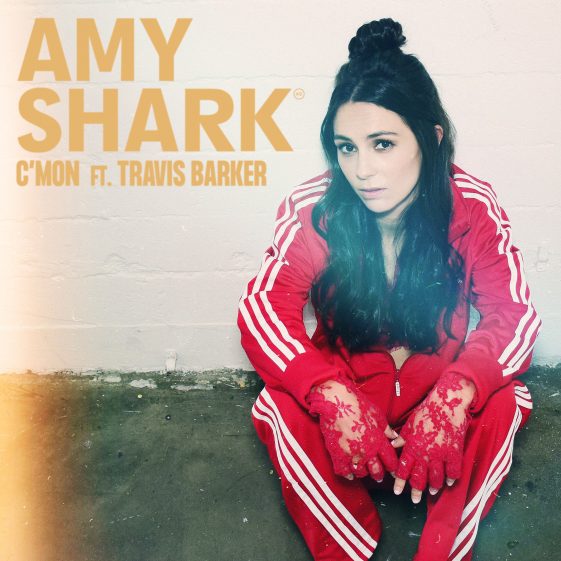 ‘C’MON’, is the second release from Shark this year and the latest taste of new music from her forthcoming sophomore album.

‘C’MON’ feat. Travis Barker is Amy reaching out for help and forgiveness, while trying to become the best version of herself. It details the extreme highs and the painful lows that come with being a musician, meticulously written with so much honesty. Amy draws on her Punk roots but with an Indie Pop sensibility that will have you singing along instantly.

Produced by long time collaborators, Dann Hume & M-Phazes, Amy reached out to Travis Barker after developing a strong relationship with the band Blink-182 over the years and follows her previous collaboration with Mark Hoppus on Gold accredited ‘Psycho’ (LOVE MONSTER).

When asked about the collaboration Amy said, “It’s quite surreal to have the drummer from one of my all-time favourite bands playing on one of my songs. It didn’t take much convincing for him to jump on board. He genuinely loved the song and took ‘C’MON’ to another level!”

The cinematic video for ‘C’MON’ which features Travis Barker and brings the song to life was directed by ARIA award winning director, James Chappell. The video is out now – watch it HERE.

‘C’MON’ feat. Travis Barker follows Amy’s first single from her sophomore album, ‘Everybody Rise’, which spent 12 weeks in the top 10 Australian airplay chart, has been streamed over 14 million times and is accredited Gold.

Amy Shark burst into the global music scene in 2016 with her breakthrough 5 x Platinum single ‘Adore’ putting her on the map as one of Australia’s most formidable emerging songwriters. This was followed by

4 x Platinum and number one AU Airplay Chart hit, ‘I Said Hi’ and the 2019 2 x platinum single ‘Mess Her Up’. Amy’s debut/breakthrough #1 ARIA album and Platinum certified LOVE MONSTER was recognised in 2018 with four ARIA awards (Album of the Year, Best Female Artist, Best Pop Release, Best Producer [Dann Hume]) and was nominated for another five. LOVE MONSTER went on to become the highest selling album by an Australian artist for 2018.

Amy will headline the pre-match entertainment at the NRL Telstra Premiership Grand Final 2020 at ANZ Stadium on Sunday, October 25.