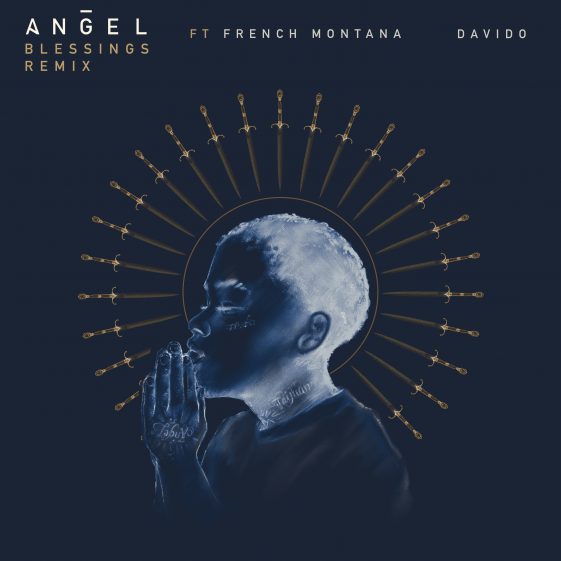 (Los Angeles, CA – March 6th, 2020) – London sensation Angel joins forces with French Montana and Davido to blend their signature sounds on the remix for “Blessings” which is out today via ByStorm Entertainment/RCA Records. Listen HERE.

Angel says, “I feel like French and Davido bring the track to a even wider audience. We all come from different cultures, me from London, French from NY and Davido from Nigeria with the Afro beat movement. It was just so organic to blend all of these sounds together. You see the track In a new light, and now the whole world hears the track With a new perspective. The original was about appreciating the blessings and now it’s about celebrating our blessings.”

Last summer, Angel announced his signing to Mark Pitts’ ByStorm Entertainment/RCA Records and released the original “Blessings” track and video which was Angel’s first U.S. based release. The video premiered exclusively on Complex and has garnered over 8M video views and streams combined.

A multi-hyphenate talent whose music seamlessly moves between genres, Angel has already been one of Britain’s best-kept secrets for a minute. He was raised in West London where he developed a love for music at a young age. Surrounded by a keyboardist father who accompanied reggae luminaries like Bob Marley and a mother who introduced him to the swirling, sensuous world of 1990s R&B allowed Angel to study different genres and create his sound. His first mixtape Patience Is A Virtue displays his uncanny merge of island sounds and the walking-on-air vibes of American R&B and hip-hop—a juxtaposition core to his upbringing and musical experience. In 2012, his single “Wonderful” peaked at #9 on the UK Singles Chart and topped the UK R&B Chart. Angel co-wrote on Roll Deep’s chart-topping “Green Light” and collaborated with fellow UK leading lights like Wiley and Giggs on the mixtape 7 Minutes Before Time. In 2018 we saw the release of his sophomore record Woman, which took his predilection for R&B further than ever before.

Some artists blur genres, but multi-platinum selling artist French Montana blurs borders. His inimitable fusion of classic East Coast rhymes, wavy pop swagger, and international ambition elevated him to the forefront of the game on a global scale. French Montana ascended into superstar status in 2017 with his smash “UNFORGETTABLE” [feat. Swae Lee]”, which cemented him in the “Billion Club” for streaming and earned a quintuple-platinum certification from the RIAA. In fall 2018, French released certified platinum single, “No Stylist” [feat. Drake], which is the first single off his upcoming album, MONTANA. The following year, he released the second single off MONTANA, “Slide” [feat. BLUEFACE & Lil TJay], which has garnered over 2.5 billion streams. In September 2019, he debuted his smash hit, “Writing On The Wall” [feat. Post Malone, Cardi B & Rvssian]. In November 2019 he released his album MONTANA which was certified gold in the first 24 hours of its release. Tracks from the album have cumulatively tallied nearly 1 Billion streams pre-release. Following the news of MONTANA, French was announced as the first “I Stand With Immigrants” Ambassador and launched his very own Karim Kharbouch Coding Fellowship Program. Partnering with The Knowledge House, his fellowship program supports immigrant youth residing in the Bronx. French has previously left an indelible mark on communities around the globe, in addition to becoming the very first rap ambassador of Global Citizen, he staunchly supported humanitarian efforts, spanning DACA, the viral Mama Hope #UNFORGETTABLE Dance Challenge, which raised over $500,000, and his Pan-African health and education movement into Morocco with Care Morocco. 2018 also saw him become a U.S. Citizen after emigrating to the South Bronx from Morocco at just 13-years-old.

Born in Atlanta, Georgia and raised in Nigeria, 26-year-old Davido (real name David Adedeji Adeleke) has been a champion for the continent of Africa.  Davido released his much-anticipated new album, A Good Time (Davido Worldwide Entertainment/Sony Music U.K./ RCA Records) at the close of 2019. Pitchfork not only named the album “Best New Music” and gave it a stellar 8.3 rating, but stated, “On his second album, the Nigerian pop artist provides not just an integrated sound all his own but a clear vision for its future. It is a buoyant, unsinkable record, one of the genre’s finest ever.” Listen to it here: https://smarturl.it/DavidoAGT. He is currently on his 2020 North American headlining “A Good Time” Tour with his band The Compozers as the opener. Tickets are on sale now at https://www.dukeconcept.com/davido and https://www.iamdavido.com/tour. Davido has earned over 30 awards including a MOBO for Best African Act, MTV EMA for Best International Act, three MTV Africa Music Awards, two BET Awards and two Nigerian Teen Choice Awards for “Top Featured Artist” and “Choice Male Artist.” A highly-prolific artist, Davido has delivered back to back hits since his musical debut in 2011. Breaking out with successive singles “Back When,” “Dami Duro,”  “Gobe,” “Aye” and “Skelewu,” the latter would enjoy attention from Major Lazer and Wiwek who went on to remix the single. His 2016 Son Of Mercy EP continued his elevation and would see further global collaborations with DJ Snake, Trey Songz, Tory Lanez, Meek Mill, Tinashe, Olamide and more. With a discography attesting to over 251 million global streams and 400 million video views, the Afrobeats forerunner has very much established himself as a force to be reckoned with.