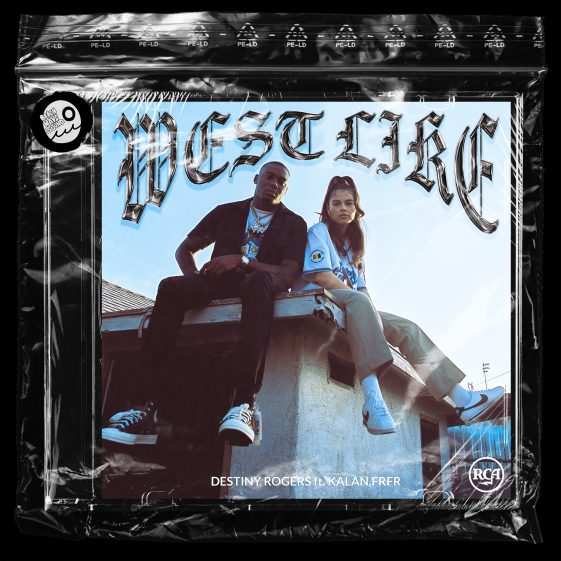 “West Like” ft. Kalan.FrFr was produced by her longtime collaborators, multi-Grammy Award winning and “Producer of the Year” nominated producers/songwriters The Stereotypes (Bruno Mars, Cardi B., Justin Bieber) who also co-wrote the track, along with Destiny and Kalan.

On “West Like,” Destiny pays loving homage to her West Coast and Latin roots, laying down a groove-heavy, talk-box-enhanced track inspired by the classic G-Funk records of the early ’90s.

“I’m Mexican on my mom’s side, and at family gatherings growing up there was always old-school hip-hop playing,” says Destiny. “This song came from wanting to make a record that perfectly captured that feeling and sound—it’s me talking about what it’s like to be from the West Coast while taking everyone along a ride with me.”

Destiny launched the video for “West Like” via MTV’s “Tune In” series.

Since first breaking through with her boldly confident but carefree single “Tomboy,” which has generated over 35 million views on YouTube (Watch HERE) and most recently covered by K-Pop super group Black Pink’s Lisa through a dance cover (Watch HERE)) that has generated over 59 million views,  Destiny Rogers has staked her claim as an artist to watch. Growing up in the Northern California town of Lodi, the 21-year-old multi-faceted musician taught herself to play guitar at age 10 and soon started writing and self-producing her own songs. Soon after the 2019 premiere of “Tomboy,” a track that recently hit #12 on Spotify’s Global Viral 50, Destiny’s spectacular rise has included touring the world and writing for heavyhitters such as Alicia Keys, Khelani and G-Eazy, all while discovering a new sound that transcends genres to irresistible effect.

Destiny Rogers is currently in the studio working on new material. She recently released a reworking of “Tomboy” feat. Coi Leray, and linked up with Coi for a special TikTok to the song which was reposted on Instagram and praised by Kim Kardashian West.  In addition, K-Pop superstar B.I released his global single, “Got It Like That” featuring Destiny Rogers with Tyla Yaweh which debuted at #1 on Spotify’s K-Pop X-Overs chart and has generated over 2 million views on YouTube (Watch HERE).

A major figure in Los Angeles’ stacked rap scene, Kalan.FrFr earned accolades and co-signs for his breezy melodies and hard-hitting bars. He made his name in 2018 with hits like “Fine Ass” and “Naked,” two R&B/rap hybrid joints that found a home on his breakout mixtape TwoFr.  In 2020, the artist’s singular alchemy caught the attention of L.A. rap superstar YG, who hopped on the remix for Kalan’s hard-hitting “Right Wit It.” His new project TwoFr 2 complements raunchy love songs with introspection and hard-earned wisdom and is home to hits like “Scoring,” which reached the Top 30 on Urban Radio Airplay, poignant opening track “Look At Me,” and “No Love” ft. Mozzy, with its cinematic music video. Now signed to Roc Nation, Kalan is ready to take his music to the next level. Stay tuned.