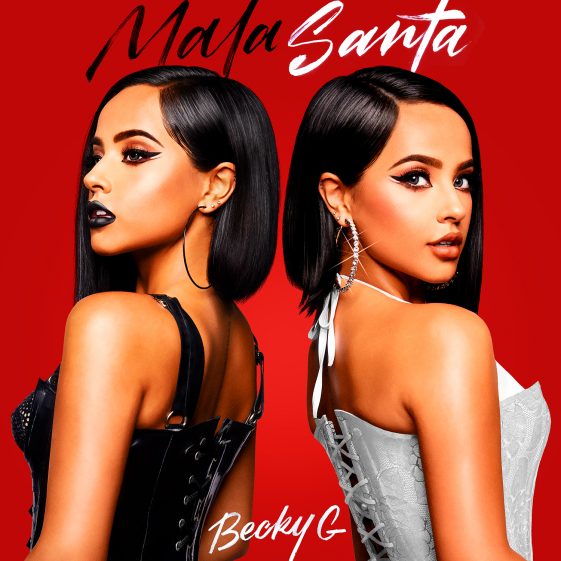 “Growing up in the industry, I struggled with my transition from ‘young girl’ to ‘woman’ in front of the world. However, as time goes by, I think people now understand that while the ‘angel’ they first met is still a part of me, my experiences up until now have unlocked a level of maturity and growth that reflects the woman I am today. As I continue to own my sound, identity and expression, I guess you could consider me the Industry’s ‘Mala Santa’ – The Angel who can be bad, sometimes,” expressed Becky G about her new album.

Mala Santa represents the duality of the good girl (santa) that is perceived as bad (mala) when she doesn’t behave in the manner traditionally expected of her. It explores the reality that most females have their Mala and Santa aspects, and this is reflected throughout Becky’s music.

Mala Santa‘s release week has been a busy one for Becky G. Yesterday she participated in the Superstar Panel at Billboard’s Latin AMAs Fest and that evening she performed at the Apple Store in Santa Monica, CA. Tonight, Becky will perform and will be honored with the Extraordinary Evolution Award at the 2019 Latin American Music Awards for her success as a young performer who has reached the pinnacle of success in a short period of time. She also has three 2019 Latin AMA nominations including Female Artist of the Year.

About Becky G
Singer, songwriter and actress Becky G was born for the spotlight and her multifaceted career is shaping up to be nothing short of iconic. The 22-year-old global superstar’s achievements include two number one hits on the Billboard Latin Airplay Charts (“Mayores” & “Sin Pijama”), a starring role in “Power Rangers,” and guest-starring in Fox TV’s Emmy-winning “Empire” series.

Becky has been honored by the Latin Recording Academy as one of the Leading Ladies in entertainment (2018) and by her home city of Inglewood, California for her contributions to the Hispanic community; and has been recognized as one of Rolling Stone’s “18 Teens Shaking Up Pop Culture” and one of Billboard’s “21 Under 21.” This month she will be honored with the Extraordinary Evolution Award at the 2019 Latin American Music Awards for her success as a young performer who has reached the pinnacle of success in a short period of time.