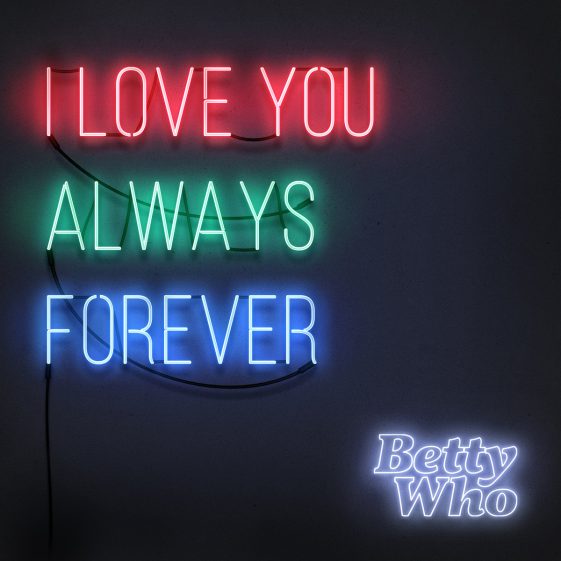 (Los Angeles, CA)—Today, critically acclaimed pop artist, Betty Who, releases her cover of Donna Lewis’ classic 90’s hit, “I Love You Always Forever”.  Produced by longtime collaborator Peter Thomas, Who’s dazzling rendition serves as a precursor to her long-awaited album, which is set to release later this year. Fans can catch Betty Who performing “I Love You Always Forever” for the first time this weekend at Governor’s Ball in New York City. Additionally, the track is on sale now and available at all digital retail providers.

Who says, “I’ve always loved this song. It came out in my early childhood and embodies such a reminiscent feeling for me. I’ve been dying to cover it for a while now and have finally done it! I can’t wait to start singing it live and sharing one of my favorite songs of all time. I’ve been working so hard on my next album, but in the meantime wanted to give something special to my Who Crew!”

Once described by New York Magazine as a mix of “early Madonna…Katy Perry and Robyn, with spunk and confidence”, and by Elle as “your next pop obsession”, Australian pop-singer, Betty Who, is a force to be reckoned with.  She has built a passionate and loyal fan base through her early EP’s, undeniable charisma and ecstatic live show.  Who independently released her first EP entitled The Movement EP, in which the lead single and fan favorite, “Somebody Loves You” debuted at #4 of Spotify’s most viral list.  Her follow-up EP, Slow Dancing, was released via RCA Records and debuted at #1 on the iTunes Pop Chart.  The success of Who’s early EP’s eventually led to the release of her debut LP entitled Take Me When You Go (RCA Records), along with performances on The View, The Today Show, and Late Night With Seth Meyers, as well as tours with both Katy Perry and Kiesza.  While Betty Who is gearing up to for her second full-length album, the release of “I Love You Always Forever” proves she has a lot more magic up her sleeve.

To Buy or Stream “I Love You Always Forever”: