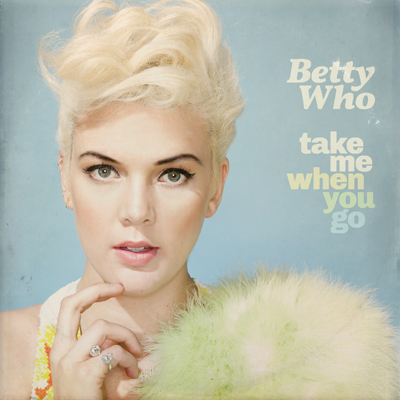 Betty Who Announces Debut LP, ‘Take Me When You Go’, October 7

Betty Who will release her debut LP, ‘Take Me When You Go’ (RCA Records) on October 7, 2014. The LP will be available for pre-order on August 27th. She will also perform her first single “Somebody Loves You” on the Today Show Wednesday, August 27th.

The album follows Who’s EP, ‘Slow Dancing’ which debuted at #1 on the iTunes Pop Chart, racking up six million streams to date and earning her an appearance on NBC’s Late Night with Seth Meyers and raves from SPIN and Nylon to BuzzFeed and Perez Hilton, along with spreads in Elle, Cosmo, and more. TIME named her One To Watch in 2014, New York Magazine described her as a mix of “early Madonna…Katy Perry and Robyn, with spunk and confidence,” and Billboard hailed her “shimmering tracks…and arresting pop textures.” Her first single and fan favorite “Somebody Loves You” which debuted at #4 on Spotify’s Most Viral list, has garnered more than seven million streams and climbing.

Betty and her band have consistently earned praise for their “tight, pitch-perfect” (Consequence of Sound) live show which was spotlighted as one of the highlights of Lollapalooza 2014 by Fuse, Billboard, Chicago Sun-Times, Time Out Chicago, Mashable, and more. Fans will have the chance to catch Who’s “effervescent” (Village Voice) stage show on her headlining U.S. tour throughout October. She will also support Katy Perry in Australia in November. Dates HERE.

‘Take Me When You Go’ Tracklist: