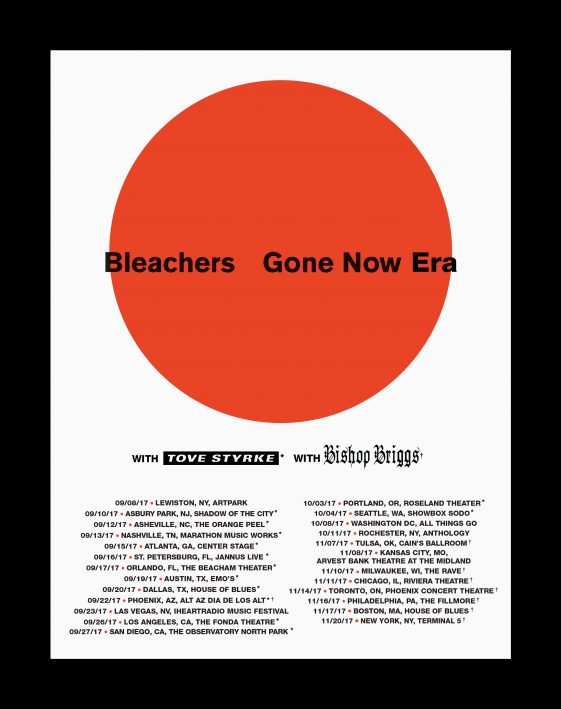 (Los Angeles, CA)—Today, Bleachers announce the second leg of their “Gone Now Era” headlining fall tour in support of their recently released sophomore album Gone Now.  The tour will be making stops in a number of previously announced cities across the U.S. such as Nashville, Dallas, and Los Angeles, as well as new stops in Chicago, Boston, and New York City. The tour will be supported by Swedish singer-songwriter, Tove Styrke, and British born musician, Bishop Briggs will be joining Bleachers on tour in various markets. Tickets for the second leg of the tour will go on sale on Friday, July 28th at 10am local time and can be purchased here. See full list of tour dates below.

Bleachers’ sophomore album Gone Now was released on June 2nd, 2017 on RCA Records. The first single off of the album, “Don’t Take The Money” (Click HERE to watch the music video), hit #3 at Alternative Radio. The band recently performed the song at the outdoor stage on Jimmy Kimmel Live! and on The Tonight Show Starring Jimmy Fallon (Click HERE).

Ahead of the album release, The New York Times put out a glorifying profile piece on Bleachers’ front man, Jack Antonoff.  The article, which appeared in the Sunday edition of the paper, states that the band’s new music is “anthemic, life-affirming pop-rock”. Click HERE to read.

Jack Antonoff is a three-time Grammy®Award-winning singer, songwriter, musician, and producer, as well as the creative force behind Bleachers. After serving as lead guitarist in multi-platinum band fun., Antonoff launched his solo project Bleachers in 2014 with the critically acclaimed debut album Strange Desire. The album found him setting emotional meditations on anxiety, depression, and loss against a backdrop of earworm melodies and massive choruses on songs like the gold-certified “I Wanna Get Better” (which topped Billboard’s Alternative chart) and the #3 Alternative radio hit “Rollercoaster.” Antonoff toured the world for a year and a half in support of Strange Desire, building a cult fan base for his cathartic, suburban influenced anthems.

To Buy or Stream Gone Now: