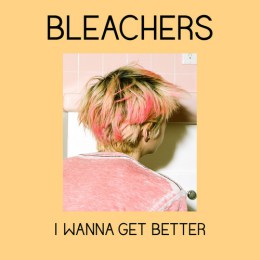 
(New York – July 28th, 2014) Bleachers debut hit single “I Wanna Get Better” hits #1* at Alt radio after only 20 weeks on the chart and is the #3 Greatest Gainer. Since its launch in February “I Wanna Get Better” has sold over 200 thousand singles and streamed over 4 million times; SPIN called the song “an ecstatic first taste”.

Bleachers debut album “Strange Desire” debuted just last week at #2 on the Billboard Alternative Albums chart and #11 on the Billboard Top 200 chart. The album has been praised by critics across the board being declared “triumphant” by Stereogum and called “full of hooks and full of heart” by USA Today. Additionally, Bleachers were recently announced as VH1’s August “You Outta Know” artist.

The album released on RCA Records was written and produced by Grammy Award winning artist Jack Antonoff alongside co-producer, John Hill (MIA, Jay Z, Empire of the Sun). “Strange Desire” was announced via Craigslist ad a few short months ago which kicked off a unique and creative album campaign. Following suit, the Bleachers Hotline was introduced and the “Strange Desire” artwork was revealed by anonymous countrywide cake deliveries that were decorated with the album cover. Release day featured a surprise public access television telethon called “Thank You Very Much” hosted by Jack Antonoff with celebrity guests and performances by Bleachers (WATCH HERE).Huffington Post exclaimed, “The Bleachers Telethon ‘Thank You Very Much’ Is REALLY Weird And We Love It.”

Last week Bleachers kicked off “The Strange Desire World Tour” in Buffalo, New York and will continue to tour throughout the fall. Please see below for upcoming tour dates:

Hailing from New Jersey, 30 year old Jack Antonoff has been in the music scene for over a decade. In 2002, with Jack as the lead singer, the success of New Jersey born indie rock band Steel Train was well underway. Steel Train’s cult following lead them to make their national television debut on Late Night With Conan O’Brien and later appeared on Late Show With David Letterman. In 2008, Jack joined Nate Ruess and Andrew Dost to form the Grammy award winning fun.

In addition to being a multi-talented musician, Jack is a critically acclaimed songwriter and producer. His achievements include fun. being honored with the Vanguard Award at the 2014 ASCAP Pop Music Awards and co-writing fun.’s Grammy award winning song “We Are Young” and Grammy nominated album Some Nights. He also received a Golden Globe nomination for his collaboration with Taylor Swift on her song “Sweeter Than Fiction.” Jack has also worked with Sara Bareilles, co-writing her Grammy nominated hit “Brave”, and Canadian Indie icons Tegan and Sara.