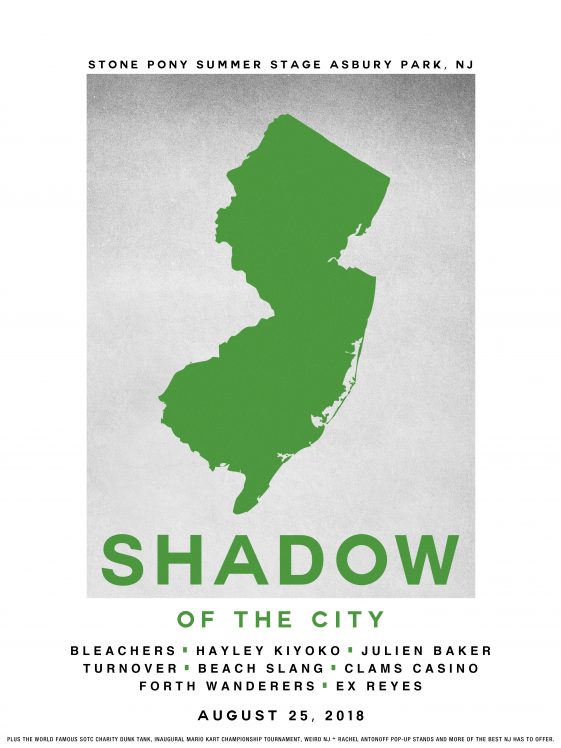 “SHADOW OF THE CITY” WILL BE HELD ON AUGUST 25TH IN ASBURY PARK, NJ

TICKETS ON SALE ON FRIDAY, MAY 11TH

(Los Angeles, CA)—Today, Bleachers’ Jack Antonoff announces the 4th annual “Shadow Of The City” music festival which will be held on Saturday, August 25th in Asbury Park, NJ at Stone Pony Summer Stage. Bleachers will headline the festival, which will also include an exciting and diverse group of performers including Hayley Kiyoko, Julien Baker, Turnover, Beach Slang, Clams Casino, Forth Wanderers, and Ex Reyes. The festival will include a number of activities like The World Famous SOTC Charity Dunk Tank, food trucks, Inaugural Mario Kart Championship Tournament, Weird NJ, and more of the best New Jersey has to offer.

A limited number of “Shadow Of The City” VIP Tickets will guarantee early VIP-only entry and a special brunch at 11am inside the Stone Pony, which includes a meet & greet with Jack.  VIP Tickets also include private bar and bathroom, VIP viewing area next to stage, and re-entry (for those over 21). Additionally, $1 per ticket will be donated to The Ally Coalition, an organization that raises awareness in support of homeless LGBTQ youth and LGBTQ equality (Click here for more info). Tickets for “Shadow Of The City” will go on sale on Friday, May 11th at 10am ET and can be purchased here.

Jack says; “This is my favorite day of the year, the venue that I grew up dreaming about playing and the town that gave me my favorite music. Asbury park and New Jersey as a whole have a sound and feeling that is a part of everything I do. This is all about celebrating that feeling and bringing something to Jersey people I had to travel for growing up. Very proud to announce year four of Shadow Of The City at the Stone Pony Outdoor Stage.”

Last year, Bleachers released their sophomore album entitled Gone Now via RCA Records, which featured the singles “Don’t Take The Money” and “I Miss Those Days”. The album received critical acclaim from the likes of The New York Times, which called it “anthemic, life-affirming pop-rock”, and Pitchfork, which stated “From beginning to end, Gone Now has all the affectations of an over-the-top pop masterpiece”. Most recently, Bleachers released their MTV Unplugged album via RCA Records, which features live audio from their performance on the second episode of MTV’s Unplugged. The album includes new Bleachers material, as well as a special versions of “Don’t Take The Money”, “Hate That You Know Me”, and “Shadow”. Additionally, Jack executive produced the soundtrack for 20th Century Fox film, Love, Simon, which features Bleachers’ current single “Alfie’s Song” (Not So Typical Love Song) along with Khalid and Normani’s “Love Lies.”