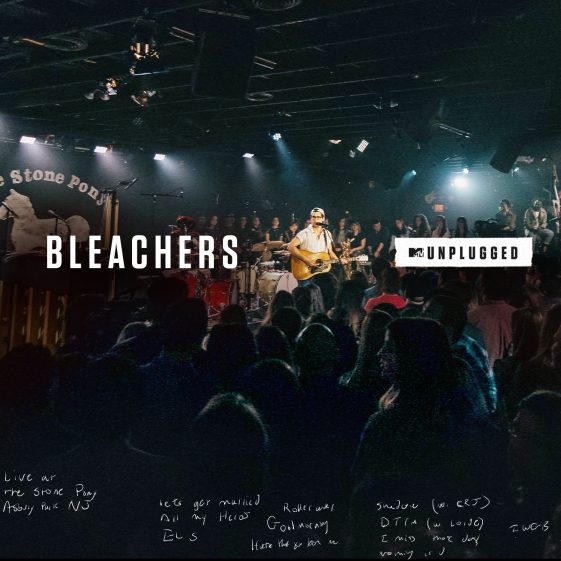 (Los Angeles, CA)—Today, Bleachers announce their upcoming MTV Unplugged album, which is set for release November 10th, 2017 via RCA Records. The band performed on the second episode of MTV’s Unplugged which was filmed at the legendary Stone Pony in Asbury Park, NJ (Click HERE to watch). The album features live audio from the performance, which includes new Bleachers material, as well as a special versions of “Don’t Take The Money”, “Hate That You Know Me”, and “Shadow”. See full track listing below.

Additionally, Bleachers release the live tour video for new single “I Miss Those Days”. The track, described as “evocative” and “rousing” by Rolling Stone, is the second single off of their recently released sophomore album Gone Now, which is available now at all digital retail providers.

Bleachers are currently on the second leg of their “Gone Now Era” headlining fall tour in support of their Gone Now. The tour kicked off in Phoenix and will be making stops in a number of major cities across the U.S. such as Los Angeles, Chicago, Boston, and New York City. The tour is being supported by British born musician, Bishop Briggs, alt-pop trio, Tangerine, and Australian singer-songwriter, Amy Shark in various markets. Tickets can be purchased here. See full list of tour dates below.

About Bleachers
Bleachers’ sophomore album Gone Now was released on June 2nd, 2017 on RCA Records. The first single off of the album, “Don’t Take The Money” (Click HERE to watch the music video), hit #3 at Alternative Radio. The band performed the song at the outdoor stage on Jimmy Kimmel Live!, on The Tonight Show Starring Jimmy Fallon (Click HERE), and most recently on The Ellen DeGeneres Show (Click HERE). Bleachers also appeared on NPR’s Tiny Desk Concert Series where they performed stripped down versions of “Everybody Lost Somebody”, “Don’t Take The Money”, and “Foreign Girls” (Click HERE to watch).

Ahead of the album release, The New York Times put out a glorifying profile piece on Bleachers’ front man, Jack Antonoff.  The article, which appeared in the Sunday edition of the paper, states that the band’s new music is “anthemic, life-affirming pop-rock”. Click HERE to read.

In addition to his work with Bleachers, Antonoff is an in-demand songwriter and producer for other artists, including Taylor Swift (he co-wrote and co-produced three songs on Swift’s Grammy®-winning album 1989 including “Out of the Woods”, along with her recent single “Look What You Made Me Do”), Sara Bareilles (co-wrote her Grammy®-nominated hit “Brave”), Zayn (co-wrote and produced his No. 2 Hot 100 duet with Taylor Swift, “I Don’t Wanna Live Forever”),  Lorde (co-wrote and co-produced her new album Melodrama), worked with P!nk and St. Vincent on their new albums, as well as with Sia, Tegan & Sarah, Carly Rae Jepsen, Troye Sivan, Grimes, and more.