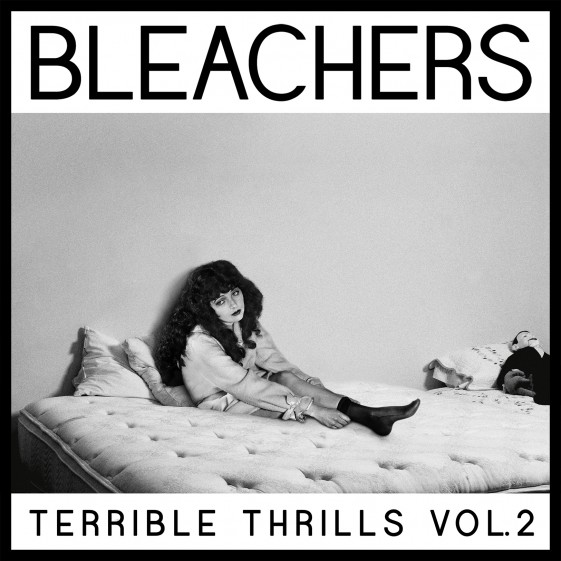 “i love female voices. i wish i had one. when i write songs i typically hear things in a female voice and then match it an octave lower so i can hit the notes. that’s why so many bleachers’ songs are sung so low. i could change the key but i like things sounding like a male version of what in my head was a female-sung song. I’ve always written this way. so with that in mind i wanted to release a version of my record that

spoke to how it was written and the ways i originally heard it in my head before i recorded and sang it. i think it’s important for people to know where the songs come from and why the songs come out sounding the way they do. i hear my music as my interpretation of a song I’m writing as a female in my head, so i wanted to make that a reality with the artists who inspire me to write in the first place.

i first had this specific idea 6 years ago when i was making the 3rd steel train album. that’s why this is volume 2 — because volume 1 happened for the self titled steel train album. the “terrible thrills” concept is something i see being a thread through different bands and projects i do. its non specific to any band or record – it’s just speaks to the way i hear music. i think every record I make should have a female companion record to go with it.

the process making this was all over the place. some artists fully recorded and recreated the versions, some i worked with them on. the collection is completely bizarre thing for me to listen to because it feels so personal as to how i write. it feels like the part of my process that I’m suppose to keep to myself or something and hearing it in headphones is utterly strange and wonderful.

one more note on TT is that this is and was always meant to be free for everyone to hear. this project took a year and tons of recording sessions and through that we all felt very proud that something as intense as a full album could be given to the people who bought the original work as a further look into it. I’ve loved how the strange desire record cycle has grown and changed constantly over the past year and a half. as i write this from the studio where I’m making the second bleachers album, i see terrible thrills as the final chapter for strange desire. ok- enjoy it!! talk soon”

Earlier this summer, Bleachers released the “Like A River Runs” EP which is available now at all digital providers. “Like A River Runs” marked the launch of the 3rd single off Bleachers’ debut album “Strange Desire” and included the Sia’s version of “Like A River Runs” which can also be found on “Terrible Thrills”. The first single “Strange Desire”, “I Wanna Get Better” quickly rose to No. 1 on the alt radio chart while the second single “Rollercoaster” hit #3 on the chart. USA Today called the album, “full of hooks and full of heart” and Stereogum declared it “triumphant.” Bleachers dominated the television airwaves in support of the album with performances and appearances on NBC’s Late Night With Seth Meyers and Late Night Starring Jimmy Fallon, ABC’s Jimmy Kimmel Live, TBS’s Conan, CBS’s The Late Show with David Letterman and The Late Late Show with James Corden, The Ellen DeGeneres Show and numerous MTV and VH1 performances and appearances including hosting this year’s MTVu Woodie Awards at SXSW. Bleachers’ eccentric and critically praised rollout campaign has featured announcements via Craigslist, a Bleachers Hotline, artwork revealed by anonymous countrywide cake deliveries, a surprise public access television telethon called “Thank You Very Much”, a series with Bill Nye The Science Guy and most recently the Streamy Award nominated original docu-series “Thank You and Sorry” which features Jack as he navigates the bizarre world of touring and life on the road with Bleachers.

GRAMMY® Award-winning musician Jack Antonoff’s music career started to take shape in 2002 as the lead singer of the New Jersey born indie rock band Steel Train; he later gained notoriety as the lead guitarist for the GRAMMY®Award-winning band fun. In addition to being a multi-talented musician,

Antonoff is a critically acclaimed songwriter and producer. This past year, Antonoff collaborated with Taylor Swift co-writing and producing her chart topping hit “Out of the Woods” along with two other tracks fromherNo.1album“1989”.Healsoreceiveda2014GoldenGlobe® nominationforhiscollaboration with Swift on her hit song “Sweeter Than Fiction.” Jack has worked with Sara Bareilles, co-writing her Grammy® nominatedhit”Brave,”CanadianIndieiconsTeganandSaraandmore.Jackrecentlycurated and founded the Shadow of the City music festival which took place in Asbury Park, New Jersey on September 19th.