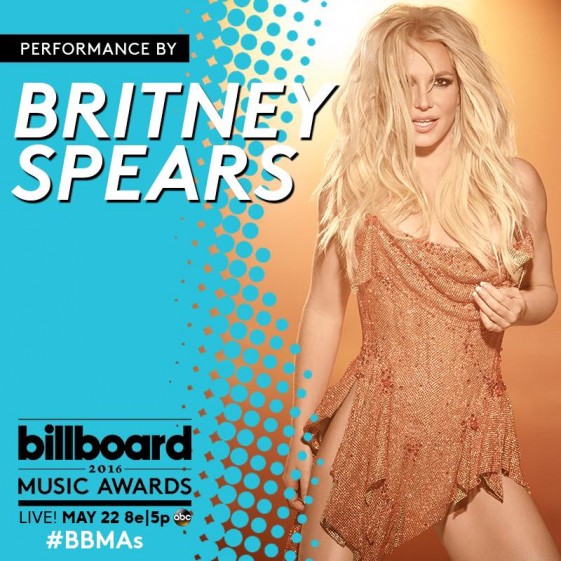 Ludacris & Ciara to Host the Award Show Live from

Click HERE for digital assets for the “2016 Billboard Music Awards”

SANTA MONICA, CA (May 2, 2016) – Billboard and dick clark productions announced today that world renowned superstar and Las Vegas resident, Britney Spears, will receive this year’s Millennium Award at the “2016 Billboard Music Awards.” The Billboard Millennium Award recognizes outstanding career achievements and influence in the music industry. Past Billboard Millennium Award recipients include Beyoncé in 2011 and Whitney Houston in 2012. It was also announced today that Spears will perform a medley of her greatest hits at the show, which will broadcast LIVE from T-Mobile Arena in Las Vegas on Sunday, May 22 at 8:00 p.m. ET / 5:00 p.m. PT on ABC. For the first time in Billboard Music Awards history, viewers on the West Coast will watch the show live along with fellow fans on the East Coast. This year’s show, which will be hosted by hip-hop artist Ludacris and international music sensation Ciara, will showcase big performances, unexpected collaborations and much-discussed pop culture moments. Spears joins previously announced performers Justin Bieber, DNCE, The Go-Go’s, Shawn Mendes, P!nk and collaborations with Nick Jonas, Tove Lo and Demi Lovato.

Multi-platinum, Grammy Award-winning pop icon Britney Spears is one of the most successful and celebrated entertainers in pop history with nearly 100 million records worldwide. In the U.S. alone, she has sold more than 70 million albums, singles and songs, according to Nielsen Music. Born in Mississippi and raised in Louisiana, Spears became a household name as a teenager when she released her first single “…Baby One More Time,” a Billboard Hot 100 No. 1 smash and international hit that broke sales records with more than 27 million copies sold worldwide and is currently 14x Platinum in the U.S. Her musical career boasts countless awards and accolades, including six Billboard Music Awards, an American Music Award and the 2011 MTV Video Vanguard Award. So far, Spears has earned a total of six No.1 debuting albums on the Billboard 200 chart and 24 Top 40 hit singles on the Billboard Hot 100 – five of which went to No. 1. Spears has been nominated for eight Grammy Awards and won for Best Dance Recording in 2005. Her cutting-edge pop concert Las Vegas residency, “Britney: Piece of Me,” at Planet Hollywood Resort & Casino has been voted “Best Show in Las Vegas” and “Best Bachelorette Show in Las Vegas.”  Spears also has been creating fragrances for over ten years, and recently added two new fragrances giving her a total of 15 fragrances available in 87 countries around the world.

Billboard Music Awards finalists are based on key fan interactions with music, including album and digital songs sales, radio airplay, streaming, touring and social interactions on Facebook, Twitter, Instagram, YouTube, Spotify and other popular online destinations for music. These measurements are tracked year-round by Billboard and its data partners, including Nielsen Music and Next Big Sound. The awards are based on the reporting period of tracking dates March 23, 2015 through March 17, 2016 and Billboard chart dates April 11, 2015 through April 2, 2016.  Since 1940, the Billboard charts have been the go-to guide for ranking the popularity of songs and albums, and are the ultimate measure of a musician’s success.

Tickets are now on sale for the “2016 Billboard Music Awards.” To purchase tickets online, fans should go to www.axs.com or www.t-mobilearena.com.

For the latest Billboard Music Awards (BBMAs) news, exclusive content and more, be sure to follow the BBMAs on social and join the conversation by using the official hashtag for the show, #BBMAs.

Cheat Tweet: .@britneyspears will perform medley of greatest hits at the @BBMAs! Tune-in May 22 on ABC: bit.ly/BritneyBBMAs

The “2016 Billboard Music Awards” will live stream in the WATCH ABC app for verified viewers in New York, Los Angeles, San Francisco, Chicago, Houston, Fresno, Raleigh-Durham and Philadelphia. Once aired, the full show will be available on demand via WATCH ABC.

Billboard is the world’s most influential music brand, built on the most complete and well- respected database of charts across all music genres. The Billboard charts define success in music. From the iconic Billboard magazine to Billboard.com, the ultimate consumer-facing destination for millions of passionate music fans, to the industry’s most elite conference series and influencer events including the Power 100 and Women in Music – the Billboard brand has unmatched authority among fans, artists and the industry alike. Billboard was named the leading U.S. brand on Twitter, surpassing the NFL, ESPN, BuzzFeed and MTV, with 7.5 million engaged actions in Q4 2015, and named an overall Top 10 U.S. Media Publisher in December 2015 with 11.8 million social actions. Billboard topped Shareablee’s list of U.S. publishers by engagement on Twitter in Q4, ahead of brands including Bleacher Report, BuzzFeed and The New York Times. Billboard magazine has scored major news-generating covers recently including Nicki Minaj, Lana Del Rey, Selena Gomez and Justin Bieber.

The “2016 Billboard Music Awards” are set to return to ABC and will be broadcast live from T-Mobile Arena in Las Vegas on Sunday, May 22 at 8:00pm ET/ 5:00pm PT. The show will showcase this year’s hottest and biggest music stars.  Billboard Music Awards finalists are based on key fan interactions with music, including album and digital songs sales, radio airplay, streaming, touring and social engagement. These measurements are tracked year-round by Billboard and its data partners, including Nielsen Music and Next Big Sound. The awards are based on the reporting period of March 23, 2015 through March 17, 2016. The “2016 Billboard Music Awards” is produced by dick clark productions. Allen Shapiro, Mike Mahan, Mark Bracco, Barry Adelman and Robert Deaton are Executive Producers.