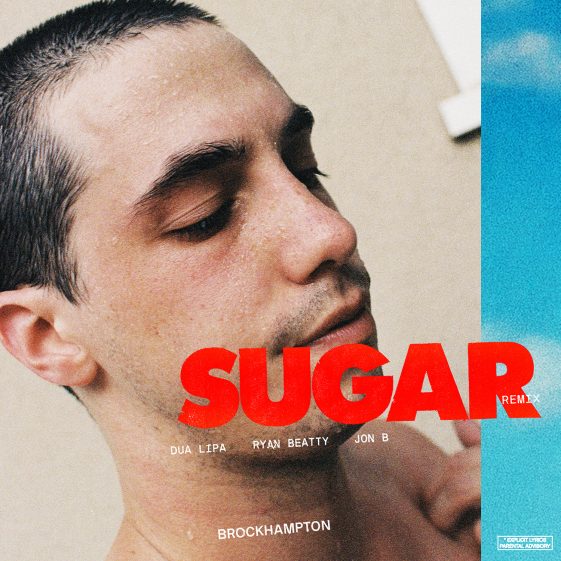 What the press is saying about “SUGAR”

“the crew has unlocked its full potential”

“one of their most boy band-esque tracks”

“the album’s most immediately infectious track, and one of the group’s best ever pop songs”

“the hallmarks of a grade-A boy-band bop”

[New York, NY – March 6, 2020] Today, America’s favorite boyband BROCKHAMPTON is sharing an official remix for their hit song “SUGAR” from their latest album GINGER. The song is reworked by pop sensation Dua Lipa and 90’s R&B star Jon B and features frequent collaborator Ryan Beatty for a new rendition of the standout track. The remix follows the two Kevin Abstract-directed visuals for the song — the visual released last month and the original video, which premiered on MTV Live, MTV U, and on ViacomCBS’s Times Square billboards in New York City.

The “SUGAR” remix also arrives just days before the group takes off to South America for Lollapalooza in Argentina, Chile, and Brazil. They will then head back to the States to perform at both weekends of Coachella before flying to Europe and the UK for a string of dates starting in May. All tickets are available at brckhmptn.com.

The remix opens up what is bound to be another successful year for BROCKHAMPTON following one of their most prolific to date. Last year saw them release their fifth studio album GINGER, which The New Yorker described as “a testament to the forces of professionalization,” wrap up their biggest North American tour to date, including back-to-back sold-out shows in New York at Madison Square Garden’s Hulu Theater, which Brooklyn Vegan described as “an unrelenting, passionate performance,” and perform at numerous festivals including a show-stopping set at Tyler, The Creator’s 8th annual Camp Flog Gnaw Carnival. They also sat down with GQ to breakdown their history in their own words and founder Kevin Abstract was featured on the cover of i-D‘s The Post Truth Issue in August, speaking with close friend and actor Shia Labeouf for the feature.

GINGER is the next chapter of BROCKHAMPTON’s rapid rise over the last two years and includes fan-favorite songs “NO HALO,” “IF YOU PRAY RIGHT,” “I BEEN BORN AGAIN,” and “BOY BYE.” The album follows their first major label album, iridescence, which debuted at #1 on the Billboard 200 and R&B/Hip-Hop charts last year.

Listen to the “SUGAR” (Remix) featuring Dua Lipa, Ryan Beatty, and Jon B and listen to GINGER above, see full tour routing below, and stay tuned for more from BROCKHAMPTON coming soon.