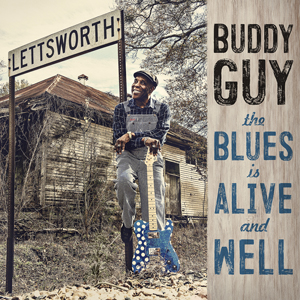 CONFIRMS THE BLUES IS ALIVE AND WELL

“Buddy Guy plays 150 shows a year …and his take on the blues, expressed through his plaintive voice and virtuosic guitar, is still scorching…” – Billboard

“…searing…masterful …. [On track ‘Blue No More,’ Bay knows he’s singing in the company of musical royalty, so he pushes his voice as hard as he can, exploring the rougher edges of his register. Buddy Guy is 81, but he shows no signs of decreasing productivity.” – Rolling Stone

“’Best New Albums This Week’ …Guy’s work on guitar, even at 81-years old, is so much more savage and visceral than his preferred designator would suggest. He’s got some real Hendrix vibes going on here. …One of the best, if not the best, blues rock album of 2018……Buddy Guy is 81 years young and still sounding as lively as ever…With a career that began in the 1950s… Guy is one of our last links to the golden age of blues. …The way it sounds here, though, that age never ended: At 81 years old, Guy sounds vital.”– Uproxx

Released via Silvertone/RCA Records, THE BLUES IS ALIVE AND WELL has been heralded as one of the best albums of his career. Grammy Award winning producer/songwriter and longtime collaborator Tom Hambridge produced the album and penned 13 original songs for the album.

THE BLUES IS ALIVE AND WELL features guest appearances by Mick Jagger on “You Did The Crime,” Keith Richards & Jeff Beck on “Cognac,” and James Bay on “Blue No More.”

It was previously announced that Buddy Guy will be the recipient of the The Americana Music Association Lifetime Achievement Award on September 12th ceremony at Nashville’s Ryman Auditorium. Visit http://americanamusic.org/ for more information.

In his quest to keep the genre vital, Guy chats about the origin of southern blues and performs on David Letterman’s series, My Next Guest Needs No Introduction, airing now on Netflix.

At 81 years young, Guy proves that it gets greater later as he continues to record and tour around the world with performances at the New Orleans Jazz & Heritage Festival, Austin City Limits Live at the Moody Theater and more (click here and see below for his current tour schedule).

BUY/STREAM: THE BLUES IS ALIVE AND WELL: