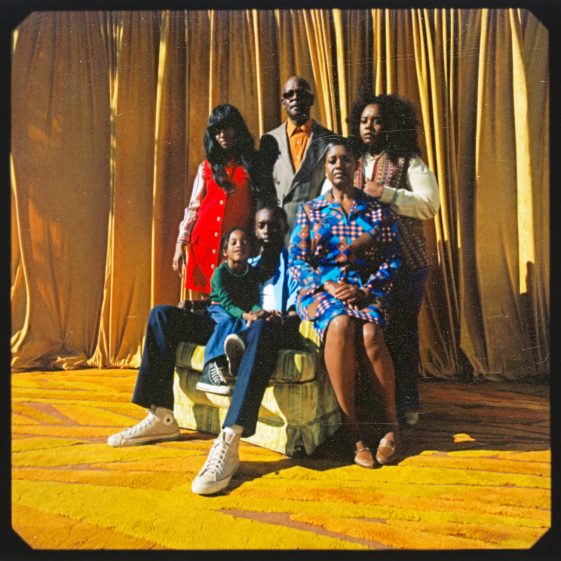 Today, Compton born and bred rapper Buddy is back to share a new song and video. “Hey Up There” features Ty Dolla $ign follows “Trouble on Central” and “Black” featuring A$AP Ferg as the latest offering off of Buddy’s highly-anticipated debut album Harlan & Alondra.

“Hey Up There” sees Buddy singing alongside Ty Dolla $ign, vowing to reach the lavish lifestyle that he’s always watched from afar. The new track is accompanied by a visual shot at the Compton airport and Tomorrow’s Aeronautical Museum that are across the street from where Buddy grew up, which played a big role in Buddy’s childhood imagination. The owner often gives back to the kids from the neighborhood and on one birthday growing up, Buddy received a flight lesson there from his mom as a gift.

Harlan & Alondra is due out July 20th via Cool Lil Company / RCA Records and is available for pre-order now. The album places listeners in shotgun cruising through LA alongside Buddy while he discovers himself within the rugged fabric of the city. Scroll down to see the newly revealed cover art that centers in on the album’s theme of family by showcasing Buddy’s own family in a photo taken in front of his childhood home.

In addition to the new song and album details, Buddy is announcing a run of tour dates with A$AP Ferg beginning in Portland, Oregon on July 7th and culminating in Boston, Massachusetts on July 27th. Scroll down to see the full routing. Buddy is also releasing a new merch collaboration with street wear brand Cactus Plant Flea Market and his own Cool Lil Company which can be found at www.coollilcompany.com.

About Buddy:
vbb
By the time Buddy was old enough to drive, he’d already been thrust into hip-hop’s fast lane. A rising rapper from Compton, California, he was discovered by Scott Vener, signed by Pharrell, and tapped for collaborations with Chance the Rapper and Kendrick Lamar. It was the kind of breakthrough most new artists dream of, but Buddy found himself restless, eager to get to work realizing his own artistic vision. In 2016, after years of industry groundwork, he summoned the courage to go his own way.

Harlan & Alondra, his highly-anticipated debut album, is both a declaration of independence and a vivid reintroduction. It’s Buddy, invigorated, in his element, and on his own terms.

Born Simmie Sims III, he grew up in churches where his father, a preacher, choir director and a recovering addict, introduced him to the uplifting power of gospel and soul. As he soaked up the sounds neighboring communities–from Compton to Long Beach, where he attended performing arts school–he observed the many interpretations of “the L.A. sound.” “I had friends in the ghetto and friends in the hills, and bounced around from school to school, so I watched all the phases–jerk music, ratchet era, gangbanger,” he says. “But they were very specific. I wanted to do something a little different.” The Los Angeles he sought to capture was bouncier and brighter, a colorful blend of jam-heavy funk, retro R&B, and chilled-out rap, strung together by his infectious optimism. “I wanted my music to sound like the sun,” he says.

In November 2016, he released “Shine,” a laid-back, West Coast earworm produced by Mike & Keys that showcases his vocal dexterity and unmistakably sunny demeanor. The following summer, Sims released Ocean & Montana, a joint EP with Kaytranada named after the Santa Monica intersection where he had his first apartment. “It was the first time I felt truly independent,” he says. Follow-up Magnolia, released that August, offered earnest reflections on coming of age in Compton with guest turns from Wiz Khalifa and Boogie. Energized and on a roll, he moved across town once more, where he got to work on his first official full-length. Out July 20 on Cool Lil Company / RCA, Harlan & Alondra is both a nod to Sims’ childhood home and a wide-angle tribute to L.A. “It’s beautiful day music,” he says. “Not just for the hood or the strip club, but for the beach, the freeway, the hills, downtown. I wanted to paint a well-rounded portrait of my home city.”

Shaped by Sims’ core studio crew of fellow native Angelenos, the album blends gospel-inflected revelations, tuneful melodies, and throwback-soul grooves. Family is an important theme, evidenced firstly in the cover art, a stylish and retro family photo taken in front of Sims’ childhood home. His nephew appears on a wide-eyed love song about fate and companionship, and on another track Sims reflects on finally getting to experience success on his own terms: “Ain’t no maybes and no probablys/I gotta be myself, that’s what it has to be/I’m happily, gladly, gradually, changing reality for my family, they proud of me.”

The package isn’t devoid of darkness– several tracks work out the stress behind family bills and court dates, and “Black,” a dizzying collaboration with A$AP Ferg, celebrates blackness in the face of oppression–but like a powerful sermon, even the heaviest moments seem positioned to uplift. His own resolution is best captured on the “Hey Up There,” a gentle letter to God featuring Ty Dolla $ign, in which Sims sings about life, death, and success with astonishing vocal clarity. “Death is inevitable, so life for me is about getting as high as you can,” Sims says. “I’m coming for my place among the successful. I’m blessed to have music as an outlet to express myself.”

What the press is saying about Buddy:
“Buddy’s knack for filling up empty space in bursts like this shows he can more than carry a song all his own.” – Pitchfork