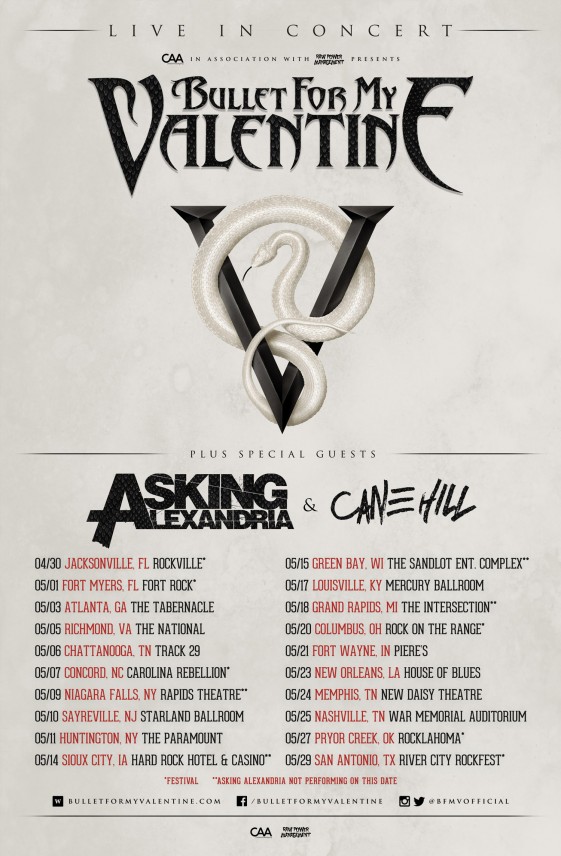 (New York – February 29, 2016) UK metal band Bullet For My Valentine will return to the U.S. for a second invasion in May in support of their recently released album, VENOM. Special guests will include Asking Alexandria and Cane Hill on select dates. The tour will start in Jacksonville, FL on April 30th at Welcome To Rockville festival and will wrap up in San Antonio on May 29th at River City Rockfest.

“Attention Army of Noise U.S.! We haven’t even left your country yet, but we’re super excited to announce that we’re coming back to the U.S this May for another run of shows on our Venom World Tour 15/16. We’re gonna be hitting a ton of places we couldn’t get to this time around so make sure you get yourself our new BFMV App to check and see if we’re coming to a town near you. Thank you and we’ll see you all very soon.” – Matt Tuck

Bullet For My Valentine Fan Club and VIP pre-sale ticketing will start on Tuesday, March 1st at 10:00AM (local time) and general on sale tickets will be available on March 4th at 10:00AM (local time) at http://www.bulletformyvalentine.com/live/. Fan Club pre-sale tickets will be available exclusively through Bullet For My Valentine’s new App, which is available for download for Android and iOS now at http://bulletformyvalentine.com/app.

Bullet For My Valentine is currently selling out shows across North America on “The British Invasion Tour” with Asking Alexandria and While She Sleeps in support of their critically heralded, fifth studio album VENOM. The current run of dates will wrap up in Montreal, QC on March 7th.

The spring tour news comes on the heels of Bullet For My Valentine’s recent debut of their incendiary new video for “Worthless,” which was directed by Stuart Birchall, who also recently helmed the videos for “Venom” and “You Want A Battle? (Here’s A War),” produced by Jamie Whymark for Kode Media and filmed at Elstree Studios in London, UK. CLICK HERE TO WATCH THE VIDEO!