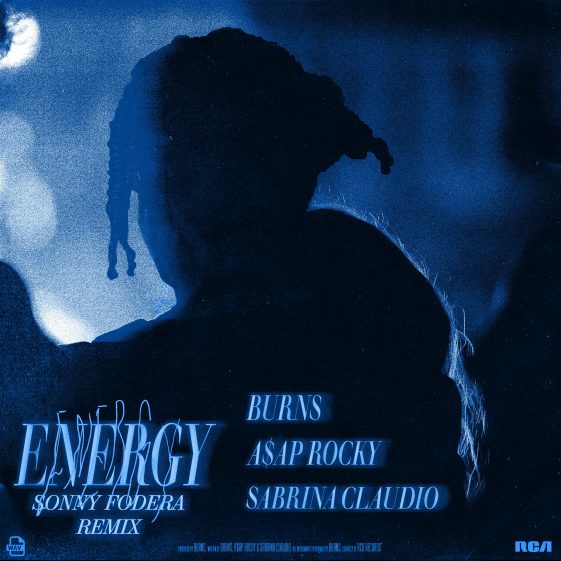 (Los Angeles, CA – July 19th, 2019) – BURNS, A$AP Rocky, & Sabrina Claudio release “Energy” (Sonny Fodera Remix) via RCA Records. Listen HERE. “Energy” was released earlier this year and was declared a “summer anthem” by FADER and a “dancefloor-ready track” by HYPEBEAST. In May, BURNS and A$AP Rocky surprised everyone with a performance of “Energy” to a crowd of 45,000 fans at EDC Las Vegas.

“I’m a big fan of Sonny’s stuff so was super happy he was up for remixing the record. He gave it exactly what I’d hoped for, taking it into that bigger dance floor world just in time for the summer!” – BURNS

BURNS, a British artist and producer based in Los Angeles, has quietly become an influential force in pop. As an in-demand producer, his past work encompasses Platinum-certified songs for Britney Spears and 2018 releases for Liam Payne, French Montana and Johnny Yukon, whilst his upcoming production credits show a host of exciting projects in the pipeline.

As well as his recent hit alongside ASAP Rocky and Sabrina Claudio, his own artist project featured the 2018 smash  “Hands On Me” with Latin pop superstar Maluma’s and the boys of Rae Sremmurd. There’s also the UK-influenced “Angel” and the more club-oriented “Worst” featuring Johnny Yukon, a frequent collaborator of BURNS’.  Simultaneously to his packed studio time, he hosts explosive residencies in cities like Las Vegas, Miami and LA, in addition to igniting Worldwide festival stages from Lollapalooza to Tomorrowland.

Influenced by everything from childhood heroes Daft Punk to A$AP Rocky and Lil Yachty, he veers between electronic expanse, hip-hop energy, and pop power with ease. BURNS’ productions represent the idiosyncrasies and intricacies of Los Angeles, the city he calls home; from the requisite romance and rawness to everything in-between; by naturally bringing a fresh vibe to modern and popular music, BURNS is already resonating far beyond the City of Angels…

With over 40 million streams on Spotify and Apple Music, Australian born, Sonny Fodera is all about The Moment and it’s no accident that’s also the name of the first track on his new album ‘RISE’, which has been released via his own Solotoko imprint on July 12th. Over the years Sonny has collaborated with the liked of Cajmere/Green Velvet, Doorly, Janai, Yasmin, Alex Mills and Chicago house staples Dajae and Gene Farris. His masterful mixing in the booth & renowned DJ sets have lead to sold out tours in the UK & N.America, Ibiza Residencies, club shows across the glob and countless major festival performances. His stand out remixes and original material have achieved more than a dozen top tens in the Beatport charts, proving that he is very much shaping the landscape for fans & DJ’s alike.