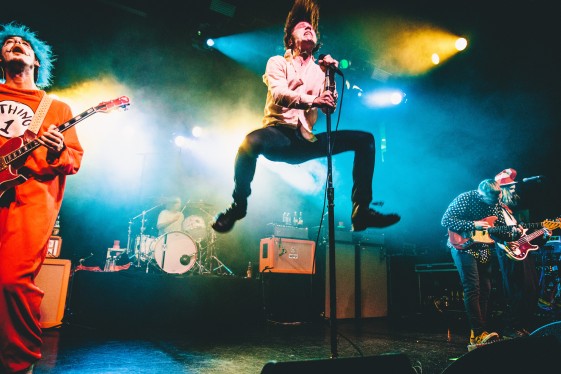 Grammy-nominated rock band Cage the Elephant announced a run of tour dates with stops in New York, Nashville, Los Angeles and more. Full tour routing is below and tickets will be available for purchase on March 18th – PRESS HERE for ticket info. This tour follows the release of the band’s fourth studio album, Tell Me I’m Pretty, which was released in December via RCA Records and debuted at #3 on the Billboard Top Rock Albums and Alternative Albums charts.

The album’s lead single “Mess Around” recently topped the Alternative and AAA radio charts – PRESS HERE to listen! “Mess Around” is Cage the Elephant’s sixth Alternative #1, joining Red Hot Chili Peppers, Linkin Park, Foo Fighters, Green Day, R.E.M. and U2 as one of only seven bands with more than five #1s in the 28 years of the Alternative chart.

Cage the Elephant is currently on the Spring Fling Rock AF tour with Silversun Pickups, Foals and Bear Hands – see routing including stops in El Paso, Buffalo and Providence below and PRESS HERE for tickets. PRESS HERE to check out the Spring Fling website for details and driving directions as well as a customized Spotify playlist equalling the duration of the drive to the show, and “Drive Home” playlists comprised of studio versions of each band’s set list.

Tell Me I’m Pretty pushes the advances the band made with their last record—2013’s Melophobia, which was nominated for a Grammy for Best Alternative Album – while also drawing from the sounds that initially inspired them to start making music. The album was produced by Dan Auerbach of The Black Keys & The Arcs (Lana Del Rey, Ray LaMontagne, The Black Keys, The Arcs), mixed by Tom Elmhirst (Amy Winehouse, Adele, Florence + the Machine) and recorded at Easy Eye Sound in Nashville, TN, near the group’s home town of Bowling Green, KY. Rolling Stone said, “Tell Me I’m Pretty reflects everything from psychedelic bubblegum pop to, not coincidentally, the spare tautness of the Black Keys.”

Melophobia took the band to new heights, spinning off two Number One singles on the Alternative charts, “Come a Little Closer” and “Cigarette Daydreams”, with Rolling Stone describing the album as, “Kentucky’s Cage the Elephant warp Sixties garage rock, Seventies punk and Eighties alt-rock into excellently weird new shapes”; while their 2011 sophomore album Thank You Happy Birthday debuted at #2 on the Billboard Top 200 chart and was praised as “one of the best rock albums of the year”. Long celebrated as one of the most explosive live bands in the world, Cage the Elephant has toured extensively, selling out several headlining runs and performing alongside the likes of The Black Keys, Foo Fighters, Muse and Queens of the Stone Age. The band performed on The Late Late Show with James Corden in December, The Tonight Show Starring Jimmy Fallon in January and Conan in February.