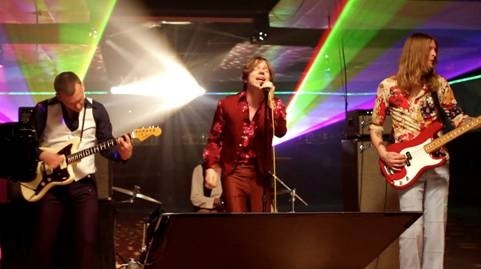 Cage the Elephant premiere their video for their second single “Take It Or Leave It” on Noisey.

CLICK HERE to watch! The video features Juliette Lewis and some sparkling roller skating dancers at a roller-rink in Topeka, Kansas in the 70s. The track is the second single off of their critically acclaimed third album Melophobia, which was released on October 8th, 2013 via RCA Records.

Matt Shultz said, “’I want the video to have a roller-skating disco concept,’ I said to my long-time friend and music video director, Isaac Rentz. He replied, ‘You’re not going to believe this but I have a sick hook-up who can get us some figure roller-skating world champions!’ We gazed into each other’s souls through the windows of our eyes–eyes that danced on unspoken, secret plans for roller-skating music video euphoria in conception. We spit into our hands and shook on it. Then, wordlessly, we made small cuts on the tips of our index fingers, rubbed them together and became blood brothers. We never actually filmed the video, it just leapt from our shared imaginings into the world, vital and fully-formed.”

The first single from Melophobia, “Come A Little Closer” reached No. 1 on the Triple A radio chart and spent 10 weeks at #1 on the Modern Rock chart, and made a mark on the Adult Top 40. The track was recently nominated for “Best Alt Rock Song of the Year” in the inaugural iHeartRadio Music awards. PRESS HERE to watch the band perform the track on Ellen. Watch the music video for the track HERE.

Following performances at Coachella in April, Cage the Elephant will tour throughout the U.S., making stops in New York, Chicago, Minneapolis and Oakland among other cities. The tour includes a mix of headlining shows with Juliette Lewis or J Roddy Walston & The Business as support, and co-headlining dates with Foals.