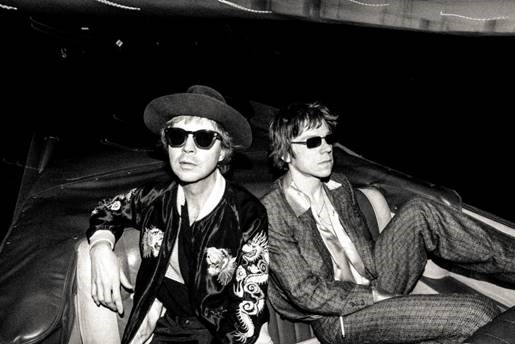 [New York, NY – May 3, 2019] Last week, Cage The Elephant released their fifth studio album, Social Cues, on RCA Records. Fans can stream/purchase the album HERE. Featured on the record is a song with Beck, entitled “Night Running,” and today they debut its music video directed by Jennifer Juniper Stratford. “For ‘Night Running,’ I wanted to create a realm where a super computer that hosts a simulation program creates a series artificial worlds,” said Stratford. “While Beck would appear to live within the software as a master control, Matt would be transported to different worlds and new identities leaving him to question what is real.”

You’ll also be able to catch the two artists performing this summer when they co-headline their “The Night Running Tour” in North America. Spoon will open all dates as a special guest with additional support from Starcrawler, Sunflower Bean and Wild Belle in select cities. Full dates below. Tickets are on sale now at LiveNation.com. Beck and Cage The Elephant have partnered up with PLUS1 and $1 from every ticket sold will be donated back into each city they are playing in, supporting local food security initiatives as they work towards ending hunger in their communities. This weekend, Cage The Elephant will headline Shaky Knees Festival in Atlanta.

Cage The Elephant’s single, “Ready To Let Go,” hit #1 at Alternative Radio in both the US and Canada, marking the band’s 8th Alternative #1. The song immediately found its footing, scoring the band its best airplay chart debut in its near-decade career. Cage The Elephant has achieved more #1s at the format than any band this decade.

“Cage the Elephant’s songs unmistakably connect to rock’s past. Its music is studded with sonic and structural allusions, though it doesn’t linger on any particular style or era. And the songs are never simply period pieces or party tunes. The band doesn’t merely understand, and revel in, what a historical anomaly it is. It also has feelings, and shows them.” – The New York Times

“The band’s sound seems more genuine, their strut into personal disorder authentic. Confidence runs throughout this assured album as if the band has finally found a hard-fought consistency. It’s the sound of Cage The Elephant finally uncaged.” – Associated Press

“The album’s introspection paired with its urgent energy make Cage The Elephant sound more passionate than ever.” – Entertainment Weekly

“Cage The Elephant have proven to be one of the most reliable and entertaining rock bands around and Social Cues has plenty of spectacular music to make it a 2019 Top 10 contender.” – Under The Radar

“Thanks to this new album, you’ll fall in love all over again with this band.” – San Francisco Chronicle