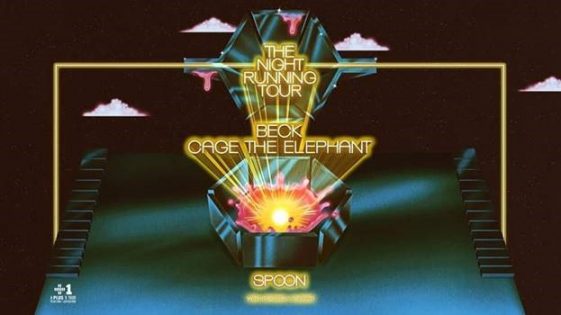 First Single, “Ready To Let Go” Debuts in the Top 10 at Alternative. #1 Greatest Gainer at ALT and AAA.

(February 11, 2019) Last week, Cage The Elephant announced their return with the release of their fifth studio album, Social Cues, on April 19th via RCA Records. Today, the band confirm a co-headlining tour with Beck, who is featured on the album track “Night Running.” The Night Running Tour will begin on July 9th and includes stops at The Gorge in George, WA, Shoreline Amphitheater in Mountain View, CA, and NYC’s Forest Hill Stadium. Spoon has also been announced as a special guest on the tour and Starcrawler, Sunflower Bean and Wild Belle will open as well in select cities. Full dates below. Prior to the tour, the band is headlining Shaky Knees Festival on May 4th in Atlanta.

Tickets go on sale to the general public beginning Friday, February 15th at 10am local time at LiveNation.com. Citi is the official presale credit card for the tour. As such, Citi cardmembers will have access to purchase presale tickets beginning Tuesday, February 12th at 10:00 a.m. local time until Thursday, February 14th at 10:00 p.m. local time through Citi’s Private Pass program. For complete presale details visit www.citiprivatepass.com. Beck and Cage The Elephant have partnered up with PLUS1 and $1 from every ticket sold will be donated back into each city they are playing in, supporting local food security initiatives as they work towards ending hunger in their communities.

“Ready To Let Go” is as sturdy and inviting as anything they’ve ever done, beginning their latest album cycle with a bang.” – Uproxx

“Contrary to the song’s title, “Ready To Let Go” does anything but, holding the listener in its intense grip as feelings of paranoia and dread coil ever tighter around your throat.” – Paper

August 11 – Toronto, ON at Budweiser Stage*^