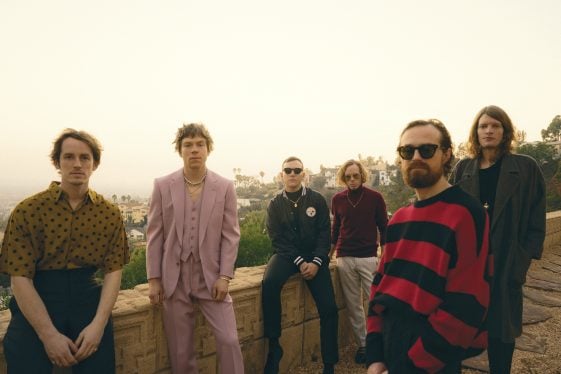 CO-HEADLINE WITH BECK THIS SUMMER

First Single, “Ready To Let Go” Jumps To #3 At Alternative

(March 8, 2019) Cage The Elephant has shared a new track today, “House of Glass.” The angular and anxious track teeters on a razor’s edge –  with new wave guitar and nervous confessions, and is a highlight from their forthcoming fifth studio album, Social Cues. The track is released today with a companion video by Lexington-based artist, Robert Beatty.  Guitarist Brad Shultz spoke to Consequence of Sound about the “Origins” of the song. Read more about it HERE and listen to the song HERE. Social Cues is out on April 19th on RCA Records. The song is available as an instant grat along with the single, “Ready To Let Go” for those who pre-order the album HERE.

Cage The Elephant has also recently announced The Night Running Tour where they will be co-headlining with Beck, who is featured on the album track “Night Running.”  Spoon will open all dates as a special guest with additional support from Starcrawler, Sunflower Bean and Wild Belle in select cities. Full dates below. Tickets are on sale now at LiveNation.com. Beck and Cage The Elephant have partnered up with PLUS1 and $1 from every ticket sold will be donated back into each city they are playing in, supporting local food security initiatives as they work towards ending hunger in their communities. Prior to the tour, the band is headlining Shaky Knees Festival on May 4th in Atlanta.

Cage The Elephant’s first single, “Ready To Let Go,” was released at the end of January with a music video directed by Matt Shultz. The single leaped to #3 at Alternative radio. “Cage The Elephant’s new single ‘Ready to Let Go’ is off to a strong start at radio,” said Billboard, “scoring the band its best Alternative Songs airplay chart debut in its near-decade career.”