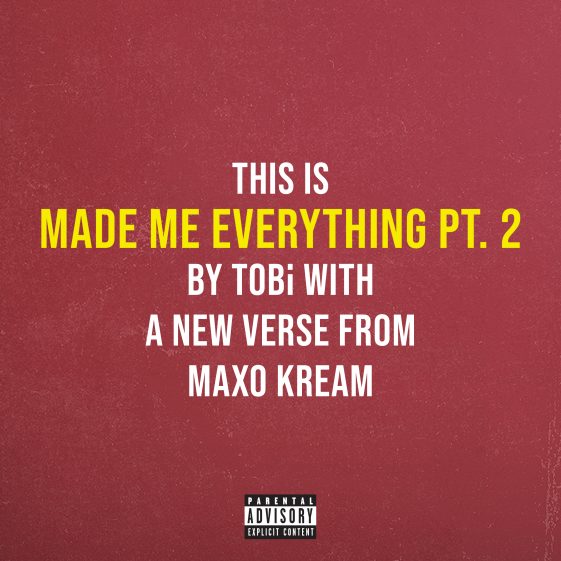 Canada Raised/Lagos, Nigeria Born TOBi Taps Maxo Kream For “Made Me Everything Pt. 2”

Watch Original Video for “MADE ME EVERYTHING”

Listen to “Made Me Everything Pt.2 Feat. Maxo Kream”: https://tobi.lnk.to/MadeMeEverything2

The track was produced by Alex Goose and Ace Harris with Hypebeast describing its production as “soulful and triumphant.”  “Made Me Everything” kicks off with a sample from the Words of Wisdom-Truth Revue’s 70s old school classic, joined by a funky playful bassline and TOBI’s stellar vocals.

TOBi comments about working with Maxo Kream:  “’Made Me Everything Pt 2.’ is just me and Maxo talking about how we’ve survived through life. We are talking about all the trials and tribulations. I am speaking my truth while he speaks his. At the end of the day we’re just tryna be prosperous. I want to empower people with this song.”

Thanksgiving week, TOBi announced a mental health initiative with Talkspace, the premiere destination for online and mobile therapy, in partnership with radio station Power 105.1’s “The Breakfast Club” to donate 150 free months of therapy. The initiative will continue through the month of December with “The Breakfast Club” airing opportunities for listeners and fans to receive therapy services along with providing additional resources for people who are seeking help. More info HERE.

Earlier this year, the rising star announced his partnership with Same Plate Entertainment/RCA Records along with the release of the Juls-produced, “Dollas and Cents.” The pair showcased their diverse diasporic lineage and the magic created when working together.

In April 2020, TOBi released STILL +  a deluxe version of his debut album which explored themes of vulnerability, post traumatic growth, self-reflection and masculinity of his time immigrating from Nigeria to Canada at the young age of 8.  STILL + added two new singles: “Holiday” produced by !llmind as well as  “Paid,” followed by the City Blues Remix featuring The Game; “180 Remix” featuring Kemba and the “24” remix featuring all Torontonians SHAD, Haviah Mighty, Jazz Cartier and Ejji Smith. The project has a combined total of 19M streams across all streaming platforms. In January 2020, Complex Magazine voted TOBi as “a top artist to watch.”

Upon meeting him, gangsta rapper isn’t the impression that most would get from Houston emcee Maxo Kream, age 29. He has a surprisingly goofy and playful demeanor, often cracking self-aware jokes and displaying a smile which showcases either his gold grin or his trademark gap in the upper row of his teeth. But, make no mistake, Maxo’s backstory is a tale consisting of crime and death that would catch the attention of the most jaded followers of gangsta/trap rap. Since his debut in 2015, Maxo has evolved into one of the rap’s most acclaimed and respected emcees, earning a reputation as a storyteller for his detailed accounts of his dark past. His 2018 album Punken earned “Best of 2018” plaudits from Pitchfork, Noisey, The AV Club, FACT Mag, and more. Now signed to RCA Records, in partnership with 88 Classic and Maxo’s own Big Persona imprint, Maxo released his critically acclaimed major label debut Brandon Banks in July 2019. The album included the ChaseTheMoney-produced “Still,” “She Live” with fellow Houston native Megan Thee Stallion, and the soulful “Meet Again,” listed by Esquire, Billboard, and Vulture as one of 2019’s best songs so far. With additional features from Travis Scott and ScHoolboy Q. What is most prominent on the album is Maxo’s storytelling as he grapples with his newfound fame with no need to return to his previous life, but still being attached to friends and family in the street, who he is not quite able to lift out of their circumstances.