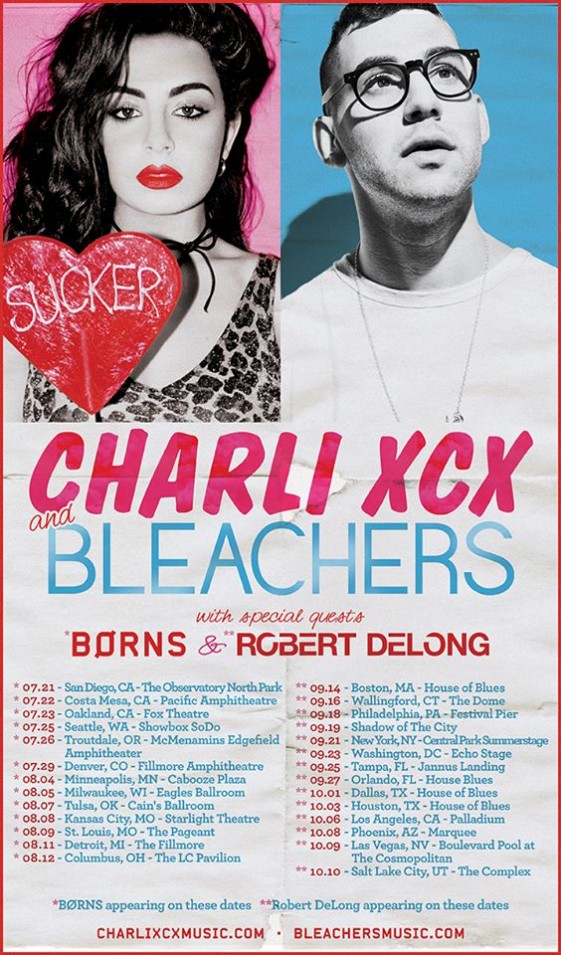 Charli XCX and Bleachers announce the second leg of the “Charli and Jack Do America” co-headlining tour today. The tour kicks off July 21st in San Diego, CA with BØRNS as support, the second leg of the tour starts on September 14th in Boston and concludes October 10th in Salt Lake City with Robert DeLong as support. The two artists previously starred together on Complex’s In-Ride Sessions: Charli XCX and Jack Antonoff Trade Remixes (WATCH HERE) and were eager to join forces again. Just this morning Jack joined Charli on stage during her Today Show Toyota Summer Concert Series performance of “Doing It” (WATCH HERE).

Charli shares her excitement; “So happy to announce the second leg of my joint headline tour with Bleachers. Can’t wait to see you all out on the road, it’s gonna be weird and wild.”

“Charli and I have been spending a bunch of time together recently and I am as a result more excited for this tour than Halloween when I was 9. We’re both planning some crazy shit. Both of us are making new records so this our way of sending off our old ones and trying some new shit. It’s gonna be summer camp meets the apocalypse,” exclaims Jack about the upcoming tour.

Tickets for the first leg of the tour are on sale now and can be purchased at both http://www.bleachersmusic.com/tour and http://www.charlixcxmusic.com/live/, the second leg tickets go on sale next Friday, June 12th at the same location.

Grammy award winner Jack Antonoff just announced the original docu-series “Thank You and Sorry” which features Jack as he navigates the bizarre world of touring and life on the road with his latest musical endeavor Bleachers. The series will debut exclusively on Google Play and will be released in full on June 16th (WATCH TRAILER HERE). Just this week Bleachers also released the “Like A River Runs” EP which is available now at all digital providers. “Like A River Runs” marks the launch of the 3rd single off Bleachers’ debut album “Strange Desire”. The first single off the album “I Wanna Get Better” quickly rose to No. 1 on the alt radio chart while the second single “Rollercoaster” hit #3 on the chart. USA Today called the album, “full of hooks and full of heart” and Stereogum declared it “triumphant.” Bleachers made their network television debut on NBC’s Late Night With Seth Meyers and followed with performances on Late Night Starring Jimmy Fallon, Jimmy Kimmel Live, a follow up performance and chat segment on Seth Meyers as well as special performance on Conan and appearance on The Ellen DeGeneres Show. Bleachers’ eccentric rollout campaign has featured announcements via Craigslist, a Bleachers Hotline, artwork revealed by anonymous countrywide cake deliveries, a surprise public access television telethon called “Thank You Very Much” and even a series with Bill Nye The Science Guy. Jack played a variety of shows in addition to hosting this year’s MTVu Woodie Awards at SXSW. Most recently, Bleachers concluded the Bleachers Come Alive! Tour and Jack joined Fred Armisen and the 8G band on Late Night With Seth Meyers for a two night residency on the show.

22 year-old Charli XCX’s rise to international pop stardom has been nothing short of meteoric. The songwriter and performer has penned and featured on some of the biggest songs of recent years—selling over 23 million singles combined worldwide. Following the 2013 release of her dark-pop debut record “True Romance” to a wealth of critical acclaim, Charli has toured the globe with the likes of Katy Perry and Coldplay while writing and featuring on some of the biggest songs of recent years. Her songwriting chops have garnished hits for an extensive list of her peers, including the 3x platinum ‘I Love It’ with Swedish duo Icona Pop and the 4 million copy-selling hit collaboration ‘Fancy’ with Iggy Azalea that earned the pair two Grammy nominations and a 2015 Billboard Music Award. Her sophomore album “SUCKER” (Neon Gold/Atlantic Records) features solo smashes including the Top 10 hit ‘Boom Clap,’ ‘Break The Rules,’ ‘Doing It’ ft. Rita Ora, and ‘Famous’ which saw its video premiere via the 2015 YouTube Music Awards. Rolling Stone declared “SUCKER” to be their ‘#6 Best Album of 2014,’ while Billboard called her “one of pop’s biggest new stars” and awarded Charlotte Aitchison with the first ever Women in Music ‘Hitmaker Award.’ Charli has graced magazine covers nationwide, including the current June/July issue of Teen Vogue (alongside Nat Wolff) in addition to Maxim, Nylon, Seventeen, Complex, and Billboard; and has performed live on Saturday Night Live, The Late Show with David Letterman, Billboard Music Awards, American Music Awards, Late Night w/ Seth Meyers, Jimmy Kimmel Live, Good Morning America, The TODAY Show, and Dick Clark’s Rockin’ New Years Eve. Arriving Monday June 8th, Charli XCX will release a special five-track “Spotify Sessions” EP recorded live from Australia.