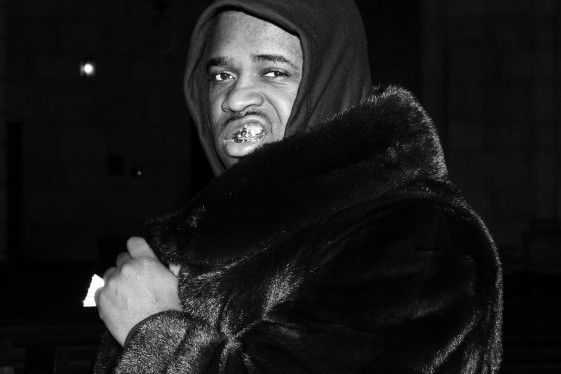 A$AP Ferg Opens Up For His Comeup

The recirculated air of the Riverside Church’s main chapel seems to grow more stale by the minute. Sunlight shines polychrome through stained glass windows. The pews that seat 2100 people, sky-high columns and arches, and gold-embellished pulpit and stage are magnificent — but void of the energy normally emitted by the worship and song of a couple thousand people, the room is lifeless and eminently vast. That is, until Ferg arrives.

Ferg’s threads aren’t particularly special, but they ooze Harlem swag: Stan Smith Adidas with green detailing on the heel, Adidas skinny-fit track pants, and a vintage Seal and Des’ree T-shirt from the British singers’ 1995 tour peek out from a leather bomber jacket. The only flash are his multiple rings — including a fly nameplate ring encrusted with diamonds — and grills that show often due to an infectious smile and laugh. His outfit is tailored for an understated magnetism that instantly shrinks the room to his size.

Ferg has more than enough charisma and a complementary fit for the photo shoot to begin, but he feels he needs something to take it to the next level. So we’re waiting patiently for a black mink coat to arrive. Eventually, a man arrives with the coat, and Ferg slips into character. Which of his characters exactly is hard to discern — there’s a fluidity among them that becomes more easily discernible through his music — but in the flesh, it amounts to a magnified presence that amplifies the already existing qualities Ferg possesses. His charm and allure seem to increase exponentially. The transformation occurs instantly, and the stark contrast is an intriguing sight to behold. In this moment, Ferg knows exactly what he needs to elevate things.

“I can’t just come in here looking raggedy,” Ferg jokes with his label rep. “I have to look like an artist.” That’s a skill he’ll need in order to execute the leap he’s poised to make.