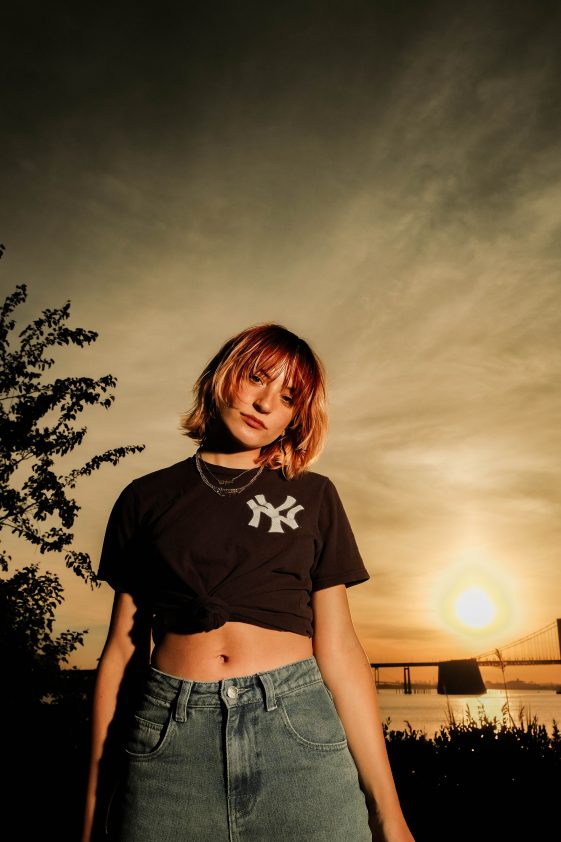 “Chloe Lilac pours her heart out” [on “Here’s Your Song”] – The FADER
“Her relatable lyrics and dreamy melodies don’t just make music. They make moments.” – Refinery29
“Lilac’s raspy voice and the thumping beat of the drums give this song the perfect end-of-summer mood” [on “Summer”] – NYLON
“an undeniably exuberant affair, Lilac easily balances maturity with the revelry” [on “High School”] – Billboard
“If there’s one thing we love about Chloe Lilac, it’s her ability to be unafraid in the face of messy honesty.” – PAPER
“an indie pop star on the rise” – Highsnobiety
“explosive confidence” – MTV News
“she shows a knack for an emotional gut-punch” – DIY
“everybody’s favorite rebel” – Bandsintown

(New York, NY – August 28, 2020) Today, Brooklyn-based artist Chloe Lilac has released her highly-anticipated sophomore EP, DOUCHEBAG, out now via RCA Records. Listen to the EP in full now here. Watch the self-directed / self-shot official video for new single and EP title track “DOUCHEBAG” here.
A project whose release marks the culmination of a period of unprecedented growth for the rising artist, DOUCHEBAG embodies a hard look inward — a fearless, anthemic collection of tracks intended to inspire raw strength from within. Chloe describes, “As a young woman I’m so conditioned to just take what men give me and thank them for it. These songs on my EP are about empowering myself and my listeners to give them strength to manifest confidence. It’s for myself and for them. It’s both.”
Alongside the EP comes brand new single and title track, “DOUCHEBAG,” a kiss-off pop-punk ode to a worthless ex, of which Chloe adds, “It’s really about me just sticking it to that motherfucker.” The song’s official video debuted today alongside an exclusive interview with NYLON here.
Amidst the lingering uncertainty that has shadowed much of 2020, Chloe Lilac has turned obstacle into opportunity, tapping into her DIY roots to self-direct and self-shoot two official videos in her Brooklyn home while in quarantine and connecting consistently with her fans on IG Live. Chloe has also asserted herself a bold activist for social causes. From taking a stand for LGBTQ rights during Pride Month (see partnerships with Pride.com and The Trevor Project) to joining the fight for racial justice (here & here), Chloe has become a beacon of strength and a model for young women and artists as they navigate the struggle of a global pandemic and a precarious future.
Today’s EP release follows a string of standout singles that have solidified Chloe’s place as a veritable force among rising alt/pop artists. She kicked off 2020 with “HERE’S YOUR SONG,” which saw critical love from outlets such as The FADER and UPROXX, who noted the track “shows another side of Lilac — one that’s more introspective.” “OBVIOUS” followed, which was praised by MTV News for its “explosive confidence” and sparked Refinery29 to proclaim, “Lilac is so talented that I can barely stand it.” Punk-inspired “MODERATION” touched on Chloe’s struggle with mental health, a track which PAPER called “instantly anthemic.”
Last fall, singles “High School” and “Special” both were given Spotify ‘New Music Friday’ placement and saw critical love from outlets such as Billboard, who called “High School” “an undeniably exuberant affair.”
About Chloe Lilac:
Born and raised in Brooklyn, NY,  the now 18-year-old Chloe’s humble roots of sneaking out to perform on the streets of NYC by age 13 continue to inspire her artistry. Building her skills as a self-produced songwriter, Chloe began releasing songs in 2017 with her first-ever release, “Reckless,” breaking the Top 5 on the U.S. Spotify Viral Chart. Her early songs and live shows saw critical nods from outlets like DIY Magazine, who note Lilac’s “knack for an emotional gut-punch.”
Chloe toured extensively in 2019 including direct support runs with mxmtoon and Tessa Violet as well as headline dates in NYC and L.A. for Neon Gold Records’ ‘Popshop’ showcases. Chloe also performed at SXSW 2019 and has toured with other rising artists including Charlotte Lawrence, Sasha Sloan, and Rejjie Snow. Chloe documented her fall 2019 L.A. headline trip in an exclusive with Flaunt.
Early 2019 debut EP, Manic Pixie Dream, kickstarted a slew of critical acclaim that has secured Chloe Lilac a well-deserved spot as a top rising artist. PAPER declared, “she’s shattering perceptions of damsels in distress simply by being vulnerable. But there’s strength in her vulnerability,” while Refinery29 included Chloe among their 2019 ‘Artists To Watch.’ Chloe has already enjoyed 20 million+ Spotify streams, a feat first kicked off by the 2018 release of “Stolen Liquor” which hit #1 on Hype Machine and sparked NYLON to claim the track “will have you reminiscing about those summer nights in high school.” Single “Summer” has attained 11 million+ Spotify streams alone and saw critical support from Ladygunn.