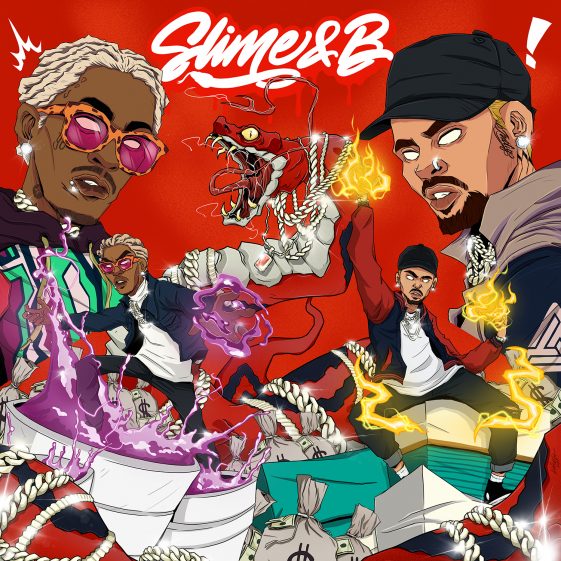 SHAD DA GOD AND TOO $HORT

05 She Bumped Her Head feat. Gunna

12 No Such Thing feat. Hoodybaby

About Chris Brown:
Chris Brown, a consummate entertainer who has shifted the climate of R&B culture since his eponymous 2005 debut, has sold in excess of 30 million albums worldwide and has surpassed over 10 billion audio streams across digital outlets to date. Brown has won more than 125 awards including a Grammy Award for his album F.A.M.E. in 2011 and has amassed over 7.5 billion YouTube views – including over 40 music videos that each have more than 100 million views earning him the title of male artist with the most Vevo certified videos ever and ‘Diamond’ status from the streaming platform.

A chart topping force, Brown has made more Billboard Hot 100 entries since the start of his career than any contemporary male singer alive to date, spending 160 consecutive weeks charting on the Hot 100. His last album INDIGO marked his third U.S. No. 1 album and has been streamed over 1 billion times and contained the hit song “No Guidance” featuring Drake. His previous album Heartbreak on a Full Moon spent more than a year on the Billboard Hot 200.

An accomplished entrepreneur and business owner, Brown’s tenacity behind his venture into fashion with his Black Pyramid brand has transformed his business from a digital fashion giant to acquiring a worldwide distribution deal and being carried in major retailers globally. In addition, Brown’s commitment to philanthropy is as important to him as his professional pursuits – including his dedication to the Symphonic Love Foundation, a charitable organization that he founded which supports and creates arts programs for youth. Brown has also donated his time and resources to various non-for-profit organizations including St. Jude Children’s Hospital, Best Buddies, Hurricane Harvey victims, and Colin Kaepernick’s “10 for 10” million dollar pledge.

Young Thug defies categorization and is a true iconoclast. Emerging on Atlanta’s hip hop scene with his 2011 mixtape series, he launched into the mainstream with his knack for melodicism and unique vocal style. He is the CEO and founder of multi-platinum selling record label YOUNG STONER LIFE RECORDS with notable artists Gunna and Lil Keed. Thug recently reached his first #1 album and his highest selling album with his latest release So Much Fun, and became the first hip hop artist to have three top 5 rap albums debut on the Billboard charts in 1 year. With over 1.5 billion streams in total consumption, inclusion in over 20 ‘Best Of 2019’ lists including Pitchfork, GQ, and Rolling Stone, the So Much Fun‘s popularity and impact on culture is undeniable. The platinum single “The London” ft. J. Cole & Travis Scott was also nominated for a GRAMMY award for Best Rap/Sung Performance. In 2019, Thug was awarded with a GRAMMY for his work and songwriting on Childish Gambino’s “This Is America” – named Song of the Year. Young Thug’s influence has been impactful across all industries from his appearances in TV shows like Grown-ish and Scandal to syncs on HBO’s Euphoria and Donald Glover’s Atlanta to having his Jeffery album cover currently on display in the Boston Museum of Fine Arts. The New York Times coins Thug as “The most influential eccentric from Atlanta.”