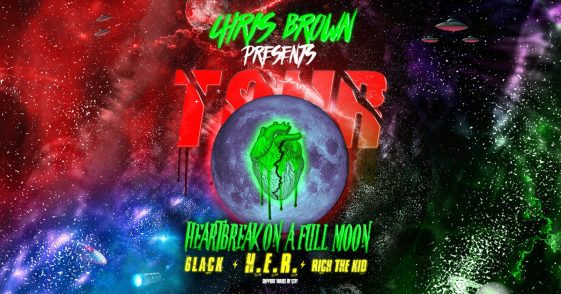 Chris Brown Announces “Heartbreak On A Full Moon Tour” With 6lack, H.E.R. And Rich The Kid

LOS ANGELES (Mar 27, 2018) – Multi-platinum, GRAMMY Award-winning R&B singer and performer Chris Brown is returning to the stage with the announcement of his Heartbreak On A Full Moon Tour today. He will be joined by hip-hop and R&B rising stars and some of today’s hottest acts with very special guest 6lack, and including H.E.R. and Rich the Kid.

The 27-city tour produced by Live Nation will kick off June 19 at the White River Amphitheatre in Seattle, WA and make stops at major amphitheaters and arenas around the U.S. before wrapping August 4 at the T-Mobile Arena in Las Vegas, NV. Tickets will go on sale to the general public beginning Friday, March 30 at 10am local time at LiveNation.com.

Chris Brown is celebrating over 12 years in the music business with the November 2017 release of his eighth solo album Heartbreak on a Full Moon, which debuted at #1 on Billboard’s R&B/Hip-Hop Albums chart (followed by the release of Heartbreak on a Full Moon Deluxe Edition: Cuffing Season – 12 Days of Christmas in December 2017). Throughout his illustrious music career, Chris has racked up over 30 million worldwide album equivalents with 11 million physical album sales, 75 million track downloads, over 12 billion audio streams and over 7 billon video streams. He has garnered six No. 1 singles (two on the Hot 100; four on Hot R&B/Hip-Hop Songs), 13 top 10 hits on the Hot 100 and 37 top 10 singles on the Hot R&B/Hip-Hop Songs chart. Adding the coveted Grammy Award to his collection for F.A.M.E., Chris is the recipient of over 40 awards, including Billboard Music Awards for Artist of the Year and Top R&B Artist, four BET Awards for Best Male R&B Artist and MTV Video Music Awards for Best Male Video and Best Choreography for “Turn Up the Music.”

6lack is an R&B singer and rapper hailing from Atlanta, Georgia. Emerging on the music scene in recent years, Rolling Stone included 6lack in their list of “10 New Artists You Need to Know” in 2016. That same year he went on to release his debut studio album, Free 6lack, and the album’s single “Prblms” which became his first platinum record. He most recently opened for The Weeknd on his Legend of the Fall tour in North America.

H.E.R. is an enigmatic singer/songwriter who has established herself as one of modern pop’s most fascinating new voices. She is signed with MBK/RCA and released the breakthrough H.E.R. Volume 1 just a little over a year ago. Then, just four months after the follow-up—H.E.R. Volume 2—H.E.R. compiled both releases for the deluxe release H.E.R., featuring six new and previously unreleased songs. Now, with her own sold out domestic and international tours under her belt, press praise from Rolling Stone, NPR, Forbes, Los Angeles Times, Billboard, Vibe and more, plus a heavily anticipated debut album set to release summer of 2018 – the future is bright for this young star.

Since the release of his debut solo mixtape in 2013, Been About The Benjamins, Rich The Kid has been instrumental in re-contextualizing Atlanta’s vibrant hip-hop landscape. His charismatic lyrics and riotously upbeat delivery made early believers of platinum-selling acts and hitmakers like Migos, Young Thug, Kodak Black, 21 Savage and PartyNextDoor. On June 9, 2017, he signed with Interscope Records and Maverick Management, and is currently working on his first major label debut.

^without Rich the Kid