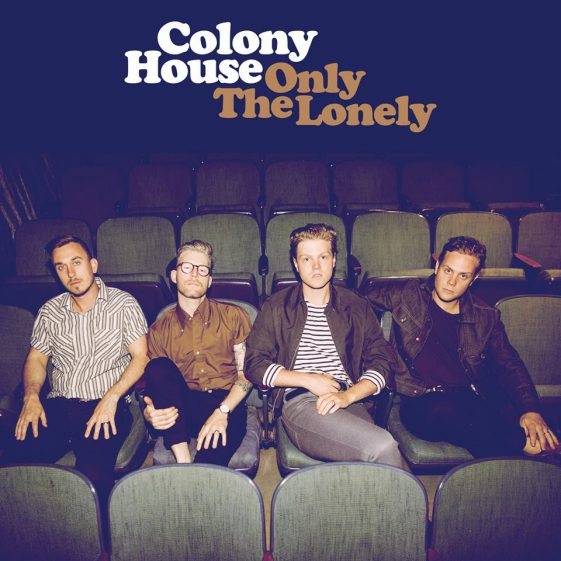 [New York, NY – December 2, 2016] Nashville-based indie pop/rock band Colony House today announce their headlining North American tour set for early 2017. The 37-city tour will kick off on February 15, 2017 in St. Louis and will stop in major cities across the U.S. and Canada including Chicago, New York, Los Angeles, Toronto and more. Tickets and VIP packages are available to the general public for purchase everywhere today, visit www.colonyhousemusic.com for more info.

Colony House today also releases a new track “This Beautiful Life”  from their forthcoming second studio album ONLY THE LONELY in stores January 13th via RCA Records. The track premiered on Baeble Music, who raved, “Soaring vocal harmonies begin to join in to make for a chilling, almost spiritual hymn…‘This Beautiful Life’ is a stripped down acoustic song with little polish and a ton of authenticity… it’s looking like this [ONLY THE LONELY] is going to be very raw, personal, and fun.” Colony House has shared a number of tracks with their fans as they approach album release early next year.  “This Beautiful Life” follows the release of album track “Lonely,” which premiered on Paste last month. They premiered the video  for their single “You & I,” co-directed by band lead singer/guitarist Caleb Chapman on NOISEY.COM who wrote: “The video for ‘You & I’…descends into chaos, instant replay smacks, freeze frame moments, egos colliding, slapstick horseplay…musically the Tennessee boys work a bright brand of indie-pop that’s entirely at odds with the physical angst manifested in this video. But it’s this very juxtaposition that makes this video so amusing to watch.” Caleb also co-directed the video for “You Know It,” which premiered on Consequence of Sound  who described the band’s sound as “twangy surf pop.” Fans that pre-order the album will receive all four tracks instantly.

The album’s current single “ You & I” was #1 most added at AAA and #3 Most Added at Alternative Radio its first week out first week of October and is getting major play on SiriusXM’s Alt Nation channel.

Just weeks ago, the band wrapped their 18 city tour with the Mowgli’s receiving rave live reviews along the way.  AXS.com wrote that the band “delivered an electric set … captivating” and Celeb Mix declared it “…one of the best shows we’ve seen this year…they killed their set in DC…completely brought the house down. With a setlist that include the eclectic styles of their first and second albums, the band really do have their eyes set on leaving their mark on the indie rock scene.” Volume wrote “Colony reminded fans of what a real rock show was at Cat’s Cradle in Carrboro, N.C. …they brought the party and the feel-good vibes.”  And the Louisville Cardinal raved “Black Keys meets Death Cab For Cutie aesthetic…Colony House captivated.”

ONLY THE LONELY is the follow up to Colony House’s debut album When I Was Younger which featured their single “Silhouettes,” which has enjoyed over 9.8 million streams on Spotify and was the #1 most played track on Sirius XM’s Alt Nation for four months straight.  The band has previously performed on CONAN, Late Night with Seth Meyers and VH1 “Big Morning Buzz,”  and has been featured by  NPR Music, Wall Street Journal, People Magazine, and  Noisey, among many others.