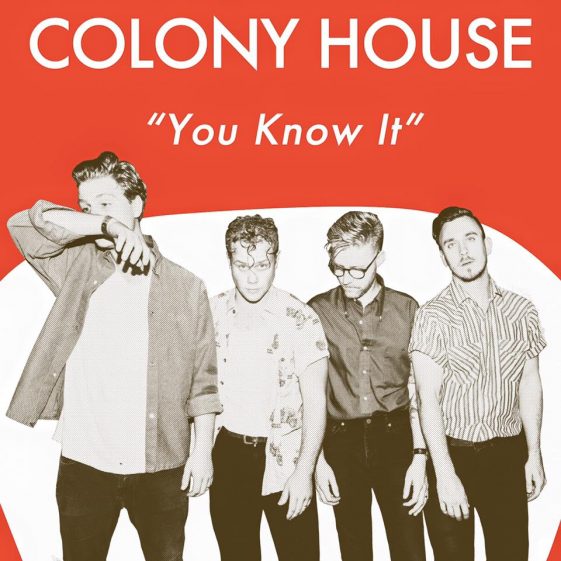 NEW ALBUM ONLY THE LONELY SET FOR RELEASE 9/16

(New York- June 24, 2016) Nashville-based rock band Colony House today premieres the video for their brand new single “You Know It” on Consequence of Sound – Click Here to watch it now. The  video was co-directed by Caleb Chapman and Ry Cox

Of “You Know It,” Consequence of Sound proclaims “The record combines the hardened skin earned from a life on the road with the indie pop charisma that got them there.”

“You Know It” is the first song to be revealed from the band’s anticipated sophomore album entitled ONLY THE LONELY, which is set for release on September 16th via Descendant/RCA Records and is available for pre-order now.  Fans who pre-order the album will receive “You Know It” instantly.

Of the release, Colony House said, “It feels appropriate that ‘You Know It’ is the first song people will hear from our second album because it was the first song written for it. ‘You Know It’ and the rest of Only the Lonely is about the tension that exists between being on the road and being home, the long drives and short nights, the high’s of playing shows and the low’s of missing our families. We find joy in both places and want to make sure we do a good job at maintaining a healthy balance between the two. The track has surf rock undertones (or overtones) and we wanted the music video to pay homage to its quasi 60’s nature.”

ONLY THE LONELY is the follow up to Colony House’s debut album When I Was Younger which featured their single “Silhouettes,” which was the #1 most played track on Sirius XM’s Alt Nation for four months straight. The band has previously performed on CONAN, Late Night with Seth Meyers and VH1 “Big Morning Buzz, “   and has been featured by  NPR Music, Wall Street Journal, People Magazine, and  Noisey, among many others.