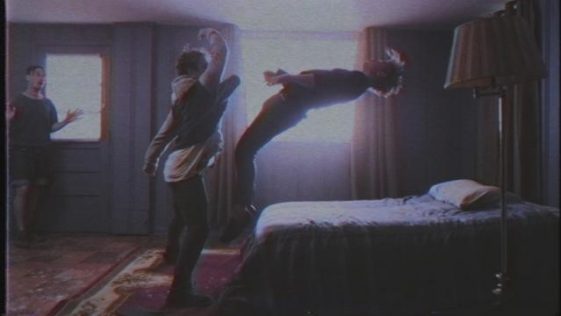 COLONY HOUSE PREMIERES VIDEO FOR SINGLE “YOU & I” ON NOISEY!
CLICK HERE TO WATCH IT NOW!
ANNOUNCES NORTH AMERICAN TOUR DATES
NEW ALBUM ONLY THE LONELY SET FOR RELEASE 9/16 ON DESCENDANT/RCA

[New York, NY – August 15, 2016] Nashville-based indie pop/rock band Colony House premieres an outrageously smart and funny video for their new single “You & I” on NOISEY.COM who writes: “The video for You & I…descends into chaos, instant replay smacks, freeze frame moments, egos colliding, slapstick horseplay…musically the Tennessee boys work a bright brand of indie-pop that’s entirely at odds with the physical angst manifested in this video. But it’s this very juxtaposition that makes this video so amusing to watch.”

Talking about inspiration for the video, lead singer/guitarist/songwriter Caleb Chapman who co-directed the video with Ry Cox said, “One of the most popular questions me and Will get in interviews these days is, ‘What’s it like being in a band with your brother? The short answer we typically give is something like, ‘It’s great! There always seems to be disappointment in the eyes of the person asking the question. Perhaps they were expecting some war story on how the band teeters on the edge of extinction because of two brothers hostile relationship.” CLICK HERE to watch it now!

Colony House also announces upcoming tour dates, kicking off August 24th at Newport Music Hall in Columbus, OH, joining Ben Rector as the opening act on the first four stops of his tour. Wrapping with Rector in their hometown of Nashville, they will join alternative rock band, The Mowgli’s on September 20th at Bluebird Theater in Denver. Their trek will end on October 18th at Club Congress in Tucson. To purchase tickets, click here.  See below for full list of dates and venues.

Colony House released their new single, “You & I” on Billboard.com last month. The band also released a first track and video from the album entitled “You Know It” which premiered on Consequence of Sound, who described their sound as “twangy surf pop.” Click Here to check it out.

Colony House Tour Dates on Ben Rector’s “The Biggest Tour I Have Done So Far” Tour:

Link to watch the video for “You & I” — http://smarturl.it/CHYAIVid