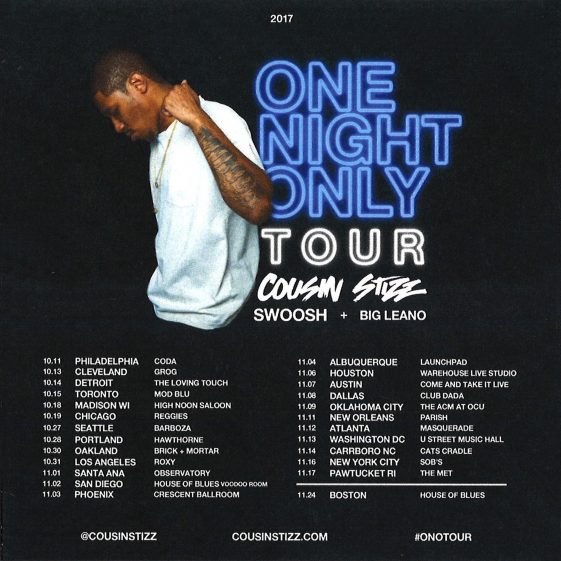 Cousin Stizz Announces “One Night Only” Headlining US Tour

NEW MIXTAPE ONE NIGHT ONLY OUT NOW

“One Night Only is Stizz’s strongest project yet” – Pitchfork

“[‘Jo Bros’ is] one of the best songs the Boston rapper has had in recent times.” – XXL

“Heavy on the storytelling and witty verbiage, the Beantown rapper delivers exactly what the rap community has asked of him: a complete project with thunderous production.” – VIBE

“the kind of project you can put on and run through without skipping any songs. Cousin Stizz just leveled up.” – Pigeons & Planes

“The Boston rapper Cousin Stizz rose to word-of-mouth underground stardom with a pair of hazy, introspective, gorgeous mixtapes. Right now, Stizz is working on his One Night Only mixtape, and he seems determined to present a different side of himself.” – Stereogum

Following the release of his highly anticipated project One Night Only, Cousin Stizz is back today to announce a headlining US tour. Kicking off in October in Philadelphia, Stizz will play 26 shows across the country before the tour wraps up in November in Stizz’s hometown of Boston. Tickets will be available for purchase at 10am local time on Friday. For more information, please visit www.cousinstizz.com.

One Night Only features appearances from Offset, G-Eazy and Big Leano, and is available across all digital platforms now via RCA Records. The mixtape is preceded by “Jo Bros,” “Neimans Barneys” feat. G-Eazy, “Lambo,” and “Headlock” feat. Offset, the latter of which has been one of Stizz’s most successful songs to date.

Listen to One Night Only: 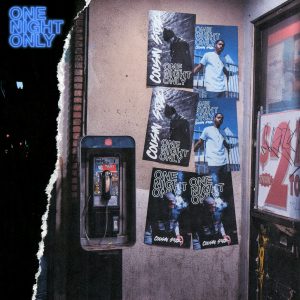 25-year-old Boston bred rapper Cousin Stizz is cementing himself as one of the top up-and-comers in hip-hop. Born and raised in a rough part of Boston’s Dorchester neighborhood, Stizz was forced to mature quickly. At the age of 13, Stizz was faced with a harsh reality when his close friend was killed by a gunshot wound, causing Stizz to misbehave. His mother then had to give him an ultimatum; he could either attend military school or high school in the suburbs to stay out of trouble. Stizz chose the latter, which served as both a huge culture shock and turning point in his life. While there, Cousin Stizz learned a lot about himself and how to adapt to others and his different surroundings. His schooling and experiences, which he calls the best four years of his life, greatly helped to shape his musical journey.

As a teenager, Cousin Stizz enjoyed freestyling and liked to rap for fun, but didn’t think much about making it a life career until his friend Michael Christmas started to become popular in the hip hop community. With the inspiration from his friend’s success, he owed it to himself and his family and friends to take his talent seriously and started recording music. This led to the release of his first mixtape Suffolk County in June 2015, which has received over 12 million listens on SoundCloud alone. He followed up Suffolk County with MONDA, a mixtape dedicated to and named after his good friend who passed away from cancer. The rapper has dominated various stages and toured all over the country, including Day N Night Fest and ComplexCon in Los Angeles and has received press coverage from outlets such as Complex, Noisey, Pigeons and Planes, FADER, XXL and more.